First things first; I learned that there are dozens of talented writers out there, at all different stages of their writer journey. If anyone in the industry says they are looking for diverse writing talent but can’t find it – send them our way. I was thoroughly impressed by both the distinctive voices of the writers and the proficiency they had reached, often self-taught.

We were looking for a specific thing – a writer at a particular stage in their journey, who could benefit from three month’s coaching, on a script that they had already developed. And we really hope to run the scheme again, so if your script needs a bit more work, get into it and hopefully you will be eligible next time.

I’ve read for many schemes and contests and it is often the case that scripts feel similar and unoriginal, because the writers are pitching what they think ‘we’ want to hear. I don’t think the seven finalists would mind me saying that their scripts are not perfect, but their potential, their charm is in their uniqueness and natural talent. The polish and finishing touches are what Script Angel is for!

Whether or not you submitted your script to us, I wanted to acknowledge a couple of things which were common among the unsuccessful scripts.

Firstly, I have expressed how much we value your individual voice. With that said, you can maintain your individuality, while also hitting certain storytelling benchmarks, which make your scripts easier to read and more appealing to the producer or agent who’s on their sixth script of the day. Yes, formatting and spelling will become important eventually, but I’m not talking about that for now.

What I want to highlight is not just the specific grammar of screenwriting, but also the writing style. Some of us are so enamoured of our own writing style, we wander off into dazzling prose, comparing the colour of the carpet to the light glinting off the water on the Gower at sunset. Trust me. Trust yourselves. You can still convey your incredible voice, while writing concisely beautiful stage direction. If your first line of dialogue doesn’t appear until page three or four, you may be taking too long on your intro.

Writing is hard, but as long as you maintain your distinct voice; reading other scripts will really help you. A lot of people just want to get writing. They don’t want to dilute their own voice and that is understandable. So, read with a purely analytical mind. [Ed: try the #onescriptaday challenge] Really look at the pace, the flow, the structure, the action – dissect and reassemble. Rewrite the first scene of your favourite scripts the way you would have written them, then compare with the original. See what I mean? This is technical work and it is an exciting part of the process. Your scripts will be so much better in a year, when you’ve subsidised your writing time with reading time. 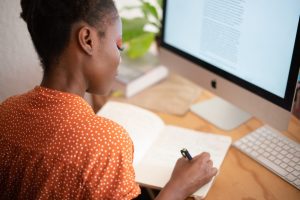 Secondly, the best way of learning your craft is to practice your craft. One of our top seven sent in a very early draft of a script and I could tell that it wasn’t a polished piece of work – but their individual voice was so stunning, they got through on pure talent. Most contests, producers and agents are not looking for raw talent. They don’t have the time or money to train you. You need to get your skill level in line with your talent so you are wowing them on all fronts.

For most people, your first script will not be the best script you write. For most people, if you’re writing script after script and not engaging in discussion by having people read your scripts, you won’t learn enough to progress your writing. Write, rewrite, send it off, write another, rewrite, keep reading, watching and writing. It sounds so obvious, but so many of the scripts I’ve read over the years have lacked the skill that only comes from practice. We can always tell.

Thirdly, the tropes you might choose to avoid; voiceover and teasers. And here’s why. It seemed like 70-80% of these 150 scripts started with a teaser – so it has the reverse effect of making your script stand out. The script propels us into the action, setting up questions and intrigue. Then, we flash back to present day or six months or six hours ago. Oftentimes the start of the story is boring by comparison, so your teaser stands out for the wrong reasons. Our winning scripts start with a moment of great character, whether it’s someone owning it or totally biffing it, letting us know we’re in safe hands and in for an entertaining ride, without giving away the ending.

Any of these kinds of techniques need to be done so well, that when they are used – and they are used a lot, I’m not arguing that – they are really characterful, impactful and you can’t imagine that show without them. See our coach Lucy’s brilliant article on the subject: scriptangel.com/voiceover-technique/

The thing is, you don’t know whether your reader will love or hate it, so it is a bit of a risk. Have you used voiceover in such a clever and brilliantly original way that it will stand out from all of the other voiceover scripts? Is that a chance you are willing to take with your precious and beautiful script?

You are showing off your unique voice and these techniques are not unique. And you are showing off your writing skill, which you have developed over years of reading and practice and writing and getting notes and rewriting – so see how you can create the most sophisticated script and really show off what you can do.

Check out our checklist ‘Is Your Script Industry Ready?’