Reading scripts is a great way to improve your screenwriting craft. Here screenwriter Lorenzo Colonna shares his experience of completing the challenge of reading one script a day for a year.
Edited by Karol Griffiths.

At 38 years old, I decided to quit my day job to become a screenwriter. Pure madness according to some people, friends and family included, but that didn’t stop me.

I didn’t have the finances to afford film school so my only choice was to do my own research. I started by reading loads of screenwriting books – Snyder, Field, Vogler, Goldman, and many others. But soon felt that wasn’t enough – I knew I needed something more.

Then one day, I discovered Scott Myers’ Go Into The Story blog and I read a post called “1, 2, 7, 14”. Scott’s suggestion was (and still is) that a screenwriter should read 1 script, watch 2 movies, write 7 pages, and work 14 hours prepping a story every week. I thought, “that’s interesting”, so I took his advice and in just a few weeks, I became addicted to reading scripts. 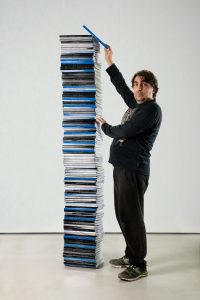 After a few months, I decided to test myself and I started the #OneScriptADay challenge. My idea was to read one script every day for a year, Christmas and New Year’s Eve included, and I posted the link of the script on Twitter. I chose to go public in order to motivate myself because, to be honest, I wasn’t exactly sure that I could maintain it.

My first was Unbroken and a year later, I ended with Little Miss Sunshine.  It wasn’t easy because some days I simply didn’t want to read another script, I was too tired, or I just wanted to go out – but I stuck to my schedule and I kept reading.

Every morning, I woke up and I decided the script I would read that day. There wasn’t a particular order, I just picked up the script that inspired me the most. Sometimes it was a feature, sometimes an hour-long pilot, or a 30-minute comedy.

Thanks to the Internet, it’s pretty easy to find scripts to read. Through a Google search, I found DailyScript, Script-O-Rama, The Script Lab, and the best of all (imho) TV Writing.

I began with scripts like  American Sniper, The Big Lebowski (great script and an awesome movie, by the way), Birdman, Locke, The Theory of Everything because I had already watched them in the cinema and I needed to get used to reading.

Usually, if I liked the script, I also liked the movie, but that wasn’t always true. Big Eyes was a different story.  I enjoyed every word of the screenplay, but when I watched the movie… I didn’t get the same feeling – but I couldn’t say why. Acting? I don’t think so because there are great actors in that movie. Directing? Are you kidding me? Tim Burton was behind the camera. So why?

Not knowing made me even more determined to continue reading  and examine scripts – so I would learn the mechanics of what made a script work and how that translated onto the screen.

So, here’s some of what I have I learned after reading 365 scripts…

–  It takes patience and skill to read a screenplay and even more to analyse it.

–  The best scripts flow with ease and each element, scene, action line needs to support the whole.

–  Every word counts. There is a tendency to want to skip over the action lines and read only the dialogue. But you’ve got to read everything or you’ll be missing out on vital information. From a writer’s point of view it’s a reminder to keep it specific but concise. Again, you want it to flow…

–  Whether a script is good or bad (in your opinion)  – reading it offers the opportunity to learn something. If it’s good- figure out why it works! If it’s bad figure out what doesn’t seem to be working. You do this by breaking it down scene by scene. Analysing the parts. Taking time to consider how the pieces work together is of great value when you go to write your own draft. Learning how others have approached techniques – is not about copying- but witnessing how it can be done and placing that understanding into your writers tool kit.

–  Use this process to examine how scripts are then translated onto the screen. This is a visual medium – so start learning how others have written for the screen – and use those techniques in your own work.

–  Writing is a muscle that needs to be worked… reading scripts is another form of working that muscle. Through it you will learn how to approach plot, subtext, dialogue, transitions, action lines, character arcs, conflict etc. The more you read, the more you’ll learn.  In some cases you will only learn what not to do – but that’s useful too – it’s all part of the training.

–  By exposing yourself to multiple writing techniques and styles – you will continue to develop your own.

–  If you are hoping to make screenwriting your career- it’s important to be educated in the language of screenwriting. The best way to do that is to read scripts – classic and current ones.

–  Everyone has an opinion…  If you read a lot of scripts, you will find some that you don’t like – even if half of the world’s population loved them. Maybe you got up on the wrong side of the bed, maybe it’s something else; it happens. Try to figure out why- because you can learn from it – AND remember that when you start handing your own script out… not everyone will love it. That’s just how it is.

If you decide to take the one year challenge, here are some tips:

–   Write down the title of every script you read because after two hundred days it’ll be difficult to remember if you read Elementary episode 20 or 22. Keeping track helps.

–   Read different genres. You can read 365 horror scripts if you’re into that, but it’s the variety that will make you better. I read a bit of everything- comedies, dramas, war, animation, sci-fi, horror… Read everything you can.

–   If you get tired of the reading don’t give up.  Read a comedy TV pilot. 30-pages long, lot of dialogue, easy peasy. Now, I must be honest with you: I really, really like The Lord of the Rings movies. I proudly own the extended DVDs and every time I see the Battle of the Pelennor Fields I get goose bumps. So when I dove into those scripts, I was expecting them to be easy. What I didn’t consider was how unbelievably long they are! Yes, I know that the movies are long too, but trust me, reading The Fellowship of the Ring (173 pages), The Two Towers (222 pages), and The Return of the King (152 pages) in three days just for fun…  well, wasn’t much “fun.” So, break up your reading – as is comfortable.

During that year, I had the chance to read amazing scripts and, one day, I would like to meet the screenwriters who wrote them. People like the Coen brothers, Quentin Tarantino, Vince Gilligan, Wes Anderson kept my eyes glued to the pages until the last page. I knew I had just read a beautiful script because I didn’t realize how much time had passed. I checked my watch and it was like “whaaaat?” Those days you just want to read another script. Obviously, there are screenwriters who weren’t able to do the same but that’s the point of it, I guess. Trying to get there!

And the good news is – if you take on this challenge it will improve your writing skills, IF you stick with it. It will help your confidence (it has helped mine) my confidence as a writer has grown because of it. I now notice mistakes in my screenplays and often can find ways to fix them by myself. That’s incredibly important if you want to become a better writer.

When I started the challenge I thought that after 365 scripts, I wouldn’t read another one. I couldn’t have been more wrong. I continue to read them regularly.  I’ve learned more about screenwriting reading scripts than in all the ‘how to’ books I read before.

A friend of mine works as an auto mechanic and he learned how to disassemble an engine and assemble it back when he was ten years old. He didn’t study at school; he just put his hands under the hood of his car to see how experienced professionals built the engine. Shouldn’t we be doing the same?  Putting our hands under the hood of the craft of writing to see how experienced professionals do it? It’s been invaluable to me – so, I highly recommend it.

About Lorenzo Colonna: After a long career as an IT consultant, Lorenzo quit his job to become a professional screenwriter. During these years, he was three times a second-rounder at the Austin Film Festival, quarter-finalist at the PAGE awards, Final Draft’s Big Break, Scriptapalooza and Screencraft’s Pilot Launch. In Italy, Lorenzo was selected as a finalist in the prestigious Premio Solinas and in the FictionLab contest which was sponsored by RAI (Italian national television) and SKY. In Europe, he was a finalist in the European Independent Film Festival in Paris, and the San Marino Film Festival.