In my first article on this subject we saw how effective it can be to focus on a single newcomer to the world you have created for your ensemble drama.

This time I’ll be demonstrating how there’s another often used technique of plunging the audience member into the world of the show. Again, it’s not a template, not a system, and works very differently in the hands of different writers, but it’s worth observing how effective is.

Let’s think of this method as “Shaking the Snow Globe” in that during the first episode the audience are observing a world with everything changing and shifting, and it remains to be seen how things will settle.

This is a dynamic way to start any story and far more engaging than “setting out the stall”. 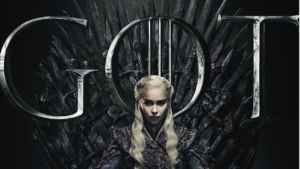 Let’s begin with an absolute masterpiece of storytelling; Game of Thrones. It’s startling to watch the first episode again and find just how much ground has been covered in one hour.

First the writer uses the classic dramatic device of tapping into the viewer’s adrenalin to jolt us into the new world (as we saw in Lost, last week). A bracingly nerve-racking escape from the POV of a young watchman guarding a gothic snowy forest from what appears to be the living dead.

Then, moments later, a double blow. A visceral shock that undermines the expectations and investments the drama seems to have worked so far to establish – this young boy, for whom the viewer feels relief in his escape from the forest of horrors, is executed by the very man whom the writer is now asking us to see as a moral compass; Ned Stark. This defines the tone of the series to come.

Benioff and Weiss, the writers (and of course George RR Martin the author), know just what they are doing as they pitch the audience into emotional and intellectual confusion because there is one issue on which the audience need not be confused or disbelieving, they have seen and know to be true what all the other characters in this world are either dismissing as a fairytale or hoping is a rumour. They have seen the White Walkers. This gives them a deep nugget of involvement in the overarching storyline for the entire Seven Seasons (and counting) of Game of Thrones.

Something very momentous is shifting and altering at the core of this world and the writers allow the audience to have an omniscience that is gripping.

Among the less supernatural characters of this show one major upset to the world has also happened; the Hand of the King, the King’s most important civil servant, has died, and he needs a man he can trust to take his place.

This man is going to be the plain-talking law-abiding Guardian of the North, Lord Ned Stark. And that is not going to suit anybody; not the Queen, not the Queen’s brother, not Ned’s wife and certainly not Ned himself. He is a Northern man and the King is demanding he do his duty and come and live in the sophisticated, slippery, treacherous Southern court. And what’s going to happen to his home, Winterfell, while he’s away? Things feel out of joint already.

And this need for an heir and the uncertainty of a new regime is also used to kick start the very different but equally successful British series, Downton Abbey.

Again we have a sudden death, off-screen, of a key character who we never know. In this case it is the next two legal heirs to Downton as they are lost with the sinking of the Titanic.

The Grantham Family now have to face the appalling prospect that the Estate will pass, not to “someone like them” a member of their close family, but to, of all things, a Solicitor. From Manchester. This is clearly the overturning of what is natural and right.

The upheavals in both of these shows are not just engaging in a dramatic way but also work really effectively to demonstrate what would have been the status quo had this upheaval not happened. It is so much more entertaining to learn about alliances and enemies, inheritances and legalities by dramatizing them being broken or tested.

As I mentioned earlier describing the opening scene of Game of Thrones, there is an important unchanging emotional Pole Star that will help the audience sort out what they might feel about this new and dynamically changing world. That is the Moral Compass figure; in Game of Thrones, Season One, it is Ned Stark.

Everybody, even his enemies, trust Ned Stark. Everybody else’s reaction can be measured against his. Even when he kills the deserter from the Wall who we watched flee in terror from the White Walkers, and later when he kills his daughter’s beloved dog, we understand that he is a man of absolute and utter duty. He keeps the law. The audience watches him suffer emotionally yet act according to what he must do. This gives the viewer a sense of just how important those laws and obligations to the Regent are in this series.

In Downton Abbey, Lord Grantham is our arbiter and Moral Compass. His devotion to maintaining the Downton Estate in its entirety rather than breaking it up in order to keep his wife’s dowry is evidently a burden he bears. Yet it is tradition and he is governed by tradition. Again, the audience gains that sense of how important this is to the series through his character, echoed and contrasted with the other figures in the drama.

Most ensemble shows do set up a wise, moral compass figure early on, even if they knock them down later, it’s useful for explaining the gravitas of certain ways of doing things in this new world – in some shows its harder to spot that person than in others. For me, looking back to Orange Is The New Black, that figure is probably Red. She’s a criminal, she’s ruthless, she’s hard as nails, but in a way she’s a mother figure, she wants her girls clean of drugs, she only wants harmless corruption. And everybody needs to stay on the right side of her. It’s useful to look at the shows you have enjoyed most and see, even amongst a bunch of bad guys, who sets the tone?

Another show, for me perhaps the most perfectly written of all those I’ve discussed is by the storytelling, character creating genius that is Sally Wainwright; Last Tango in Halifax.

This witty, joyful story of the marriage of two elderly widowed grandparents who were once childhood sweethearts in Yorkshire is a perfectly crafted example of how several character stories can run side by side, intertwining, colliding and harmonising, always revealing more of the character’s depths at each turn.

Episode one is a particular delight to watch. We have, on the one hand, a rather moany, moneyed middle class elderly lady, Celia, with her daughter, Caroline, the Head teacher of a private school, and on the other, up in a scruffy ramshackle farm, a good natured, slightly shy grandfather, Alan, with his straight-talking, funny, muddy-handed daughter, Gillian, who runs the farm. As the clever short scenes intercut between the two families we learn that the two old people have reconnected on Facebook and plan to meet up.

It’s the symmetry of the episode that is remarkable and remarkably satisfying. Even though at first watch we are only half aware of the structural neatness it really punches home the social satire and laconic wit of the show. On the one hand the similarities in the character’s lives: each daughter dealing with an unwelcome Ex; one that wants to come back because he realises that he has made a terrible mistake; one that won’t go away even though he is dead; the story of his death is permanently there. The differences; as one daughter walks down the aisle of the school chapel to take morning assembly, the other walks down the aisle of a grotty local supermarket ready to take up her place on the till.

And as the writer chops and cuts between these two families we see the quiet joyful story of the two elderly people who had accepted that love was behind them, meeting up and suddenly realising they each loved the other fifty years ago. And never forgot each other.

The audience is treated to a hilarious comedy car chase that brings both families running to take care of their elder relatives and a spectacular collision of the two worlds over a disputed parking space. The Headmistress, stressed and snobbish, calls the farming daughter “low-life trailer trash”. “snobby bitch!” snaps back Alan’s fraught daughter. It’s the perfect moment for the two old folk to announce “We’re getting wed”.

The audience can’t help but be delighted for them and be left in amused anticipation of the fallout of how these two vastly different worlds will ever harmonise. But they know already from the characters revealed that they will enormously enjoy finding out.

In all these series it’s change that defines the world, which means essentially that it is dramatized rather than merely prosaically described.

I hope these few weeks of analysing how some great ensemble shows have captured an audience from the start have given you some ideas for how to look at and think about your own work. I hope some day to read or indeed watch your pilot episode and be drawn, heart and mind into your new world.