There are a ton of good reasons why you should be writing science fiction. I’ll start with the obvious one – money – because no other genre can match science fiction at the box office. Take a look at the worldwide grosses for 2014 to date, 11 of the top 20 are science fiction (and 3 are fantasy, just saying…) so while it may jar with your art-house sensibilities, if you want get a producer excited, then a great high-concept, science fiction story will appeal to that basest of instincts – profit.

But of course there’s a lot more to science fiction than that.

Is It Sci-Fi For The Right Reasons?
Good science fiction isn’t all alien invasions, giant lizards or post-apocalyptic cannibals, and there’s a reason why science-fiction is known as ‘the genre of ideas’, it’s because great science fiction asks big “What if..?” questions, the kind of questions that allow us to examine the day-to-day realities of this world by exploring the different realities of worlds we create. Science fiction lets us examine core social and societal issues and pose difficult and searching questions about subjects that concern all of us – pollution, over-reliance on technology, globalisation, genetic engineering, personal data, global pandemic, overpopulation, government surveillance – the list is endless, but it lets us do it without pointing directly at any individual or group, any particular religion or country, any specific corporation or government.

Science fiction allows us to shine a spotlight on something, bring it to the attention of the world and say, “Look at this! Look what is happening! Look what they’ve done!“, without preaching, and this is especially true if that something is out of our control or something we cannot easily change.

So the key to writing good science fiction is to have something to say. Don’t just use it as an excuse to have giant fighting robots level an entire city. You can do that if you want, but do it for the right reasons.

Are You Really Writing a Sci-Fi?
The next question to ask yourself is are you using science fiction as a genre or just a setting? Unlike other genres, science-fiction comes in all shapes and sizes. Romantic comedies are romantic and funny, horror films are horrifying, dramas are dramatic, and thrillers are thrilling. Science fiction can be all of those things and be science-fictional. Look at some examples:

Every genre has its particular story beats and you will save yourself a whole lot of grief and aggravation if you figure out your primary genre and then write to the beats of that genre first. So if you’re writing a science fiction revenge thriller then I would suggest that you actually plot a decent revenge thriller first, then as you re-write, build up the science fiction elements slowly, revealing your world through action and character rather than trying to build a ‘cool’ sci-fi world and then shoe-horning a revenge thriller plot into it. You’ll be rewarded with a far better screenplay if you do it that way, believe me.

Have You Thought Your Sci-Fi World Through?
Building a unique world for your characters, putting all the great stuff that’s been in your head on the page, is the most fun you can have while writing. But effective world-building requires the right level of detail to make it work visually, and well thought out, well-connected elements for it to make sense.

Arguably the two most important world-building elements in any science fiction setting are time and space, but by ‘time’ I don’t mean when your story is set, I mean the social/cultural stage that your world has reached, and by extension when I say ‘space’ I don’t mean the cosmos, I mean the kind of space that your characters inhabit. There are five world stages:

Second Stage World
The time of settled villages and small towns with permanent houses. Hunting and gathering is supplemented by farming. Taxation means law and order is established.

Fourth Stage World
The oppressive, dystopian world of our nightmares. The city is vast. People pay high prices to live in tiny spaces. Unemployment, poverty and crime are rife. Taxes are high but government services are poor, inefficient and corrupt.

Fifth Stage World
The dying world. The environment destroyed, natural resources depleted, and air and water polluted beyond recovery. Food is scarce, disease is rife. Eventually humans will die out, leaving a quiet and desolate planet in their wake.

Whether your story takes place on a newly discovered planet or in London of 1830, the relationship that your characters have to where they live and the tools and technology that surround them will be critical in building your world. Good science fiction rarely sits squarely within a single world stage, more likely it will sit at a point of change between two of the stages, exploring the effect that giant social and cultural change has on the characters as well and on society at large.

Get the science as right as necessary
The science always matters – even if it’s totally made up – but it really matters when you’re depicting things the audience know about. If someone describes a scientific principal, don’t ‘think’ you know it, make sure you know it, and then double-check with someone who does know it to make sure you understood it. And scientific thinking changes regularly with new findings, so make sure you’re up-to-date.

Basing your sci-fi worlds on the real world principals grounds them and makes them seem authentic, but this means knowing a little of what you’re talking about. In the same way that you should understand human and animal physiology when creating alien creatures, you should understand other sciences, arts, skills and trades to successfully create your own versions. If you’re going to have huge buildings then you should understand architectural principles so that you get the scale and proportions right. If you’re going to invent a language then you need to know about lexicons, morphology and syntax. The same goes for your systems of law, banking and commerce, and knowing proper military tactics will lend your armies a credible air of invincibility.

You don’t need to be an expert, just learn enough so that you can write about it convincingly, but above all, be consistent. It doesn’t matter if the physics of your world aren’t real as long as they are consistent and you never break your own rules. If it helps, draw maps and pictures, construct mythologies around your world and its inhabitants – whatever it takes to immerse yourself in your world. There’s a good chance that none of it will make it into your screenplay, but if they’re clear in your own mind it will make your descriptions come alive.

Put down the thesaurus and step away from the dialogue
Jargon and sci-fi go hand-in-hand. Anytime you discuss new technology or scientific principles, complex processes or advanced systems, inevitably the folk that work with them will develop acronyms, technical references and slang that only they will understand. What writers of science fiction must avoid is baffling, nonsensical, faux-technology. If you’re ever tempted to write a line like “They’ve re-interpolated the quantum field transmission data and reverse-engineered the resulting Heisenberg matrix to calculate our vector”, just remember that “They’ve found us!” is a much better line. It’s easier to say, easier to remember, has much greater impact and makes sense to everyone who hears it.

It’s also worth remembering that sci-fi names can be a source of much comedy if you’re not careful. Ixnys Zyxiz may look great on the page but if the reader can’t read it they’ll dump your script in the trash before they get 10 pages in, besides, it’s difficult to take anyone seriously when their name is Ambassador Zorax.

Write something that can be made!
Interstellar space travel and alien creatures usually require vast battalions of sfx people and multi-million dollar budgets to realise, so unless you’re Christopher Nolan or best mates with Will Smith, do yourself a favour and look for the small stories, the ones in single locations, with few actors, no special effects and write those. Explore social issues here on Earth, extrapolate from current technologies in medicine and genetics and find stories there. Explore the big-impact issues that affect all of us – often they’re the stories that are the most interesting, and more importantly, more likely to get made, and isn’t that why we write screenplays in the first place? 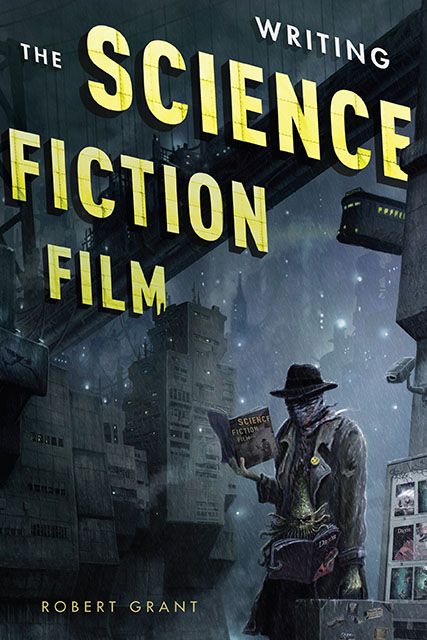 Robert Grant is a filmmaker, screenwriter, critic, and script consultant, based in London, with a penchant for science fiction and fantasy. He is one of the core team behind The London International Festival of Science Fiction and Fantastic Film and Literary Editor for SCI-FI-LONDON.com. He has twice served on the jury of the Arthur C. Clarke Award for Science Fiction Literature, the most prestigious science fiction award the UK has to offer, and his book ‘Writing The Science Fiction Film‘ (Pub. MWP), is out now.