Let me keep you in suspense for a little while. In my view, a thriller is a film in any genre but with added fear. Fear and suspense dominate the thriller – an almost constant sense that something frightening is about to happen – or is happening right now. This contrasts with a classic action-adventure, where the dominant emotion is fast-moving excitement. 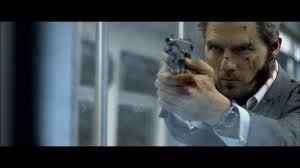 The most common thrillers are crime stories (Collateral, Cape Fear, Psycho), though there are many spy thrillers (The Spy Who Came In From The Cold), psychological thrillers (Side Effects) and comedy thrillers (Charade). For obvious reasons, it’s more difficult to create thrillers from certain genres, such as sports, though I know of at least one – Rollerball. And the 2011 movie Margin Call is a gripping financial drama thriller. All good stories contain suspense – however in a thriller the suspense is cranked up (for you fans of Spinal Tap) to number 11.

Genre starts with emotion, and as we’ve seen a thriller is all about fear. However, other genres in the film will demand their own emotions too. If your thriller is also a crime story, for example, you also need the emotions that audiences expect from a crime story – primarily injustice and/or mystery.

In Collateral the story centres on an innocent taxi driver who is hired by a man to drive him round LA, only to find that he’s chauffeuring a ruthless hitman conducting a series of hits. Worse, the cops think he’s the killer. Miss out the injustice of his plight, and the mystery of who the final victim is to be, and you miss a large part of what the audience needs.

The second step is to identify your antagonist. To build up the fear that must run through the story, the villain of your thriller will need to be powerful and ruthless. Like the hitman in Collateral, he must be ready and able to inflict harm at a moment’s notice.

The threat must be seen as early as possible. Most often, that threat will be violent – hence the dominance of crime stories as thrillers. The current BBC 4 Australian thriller series The Code combines both crime and spy genres. The first episode opens with a dead body and a politician betraying a colleague. We are in no doubt from the start as to where the danger lies.

(The 2013 movie Side Effects is a rare example where the threat is not so much one of violence or death as the destruction of a man’s career and marriage).

Despite resembling the monster in a horror movie, a thriller antagonist shouldn’t be all-powerful. He must be human. In the best thrillers, we understand the antagonist’s motivations, even if we don’t sympathise – making the danger feel all the more real.

This also adds to the suspense by both making the villain less predictable and also offering a greater amount of hope. Like a light that shows up the darkness, the possibility of hope ironically serves to highlight the fear.

At the same time, a thriller needs a particular kind of central character. As we’ve seen, there are parallels with horror, but in a horror story the protagonist is very much a victim, with only his wits to save him. In a thriller, the central character normally has more than that. She has skills she can, and does, draw on.

In the gripping 1967 film Wait Until Dark, the protagonist, Susy, is blind and being terrorised by vicious criminals. But despite her disability she has intelligence and resources to fall back on. For example, she manages to black-out the lights so as to even up the odds. Of course, the villains find a way round that, and the suspense mounts.

In The Code, Ned, a journalist investigates a suspected cover-up. The forces against him are vicious and unpleasant, but unlike in a horror movie, he has people he can call on, investigative skills he can use. Even his brother, who seems to have autistic tendencies, is relatively high functioning, especially when it comes to hacking computers.

All thrillers need moments of sheer terror. The best kind of terror scenes combine unpleasant violence with sudden surprise. However, not too often – in this genre having too many big moments will reduce their effect. Stephen Spielberg tells how test audiences responded well to a shock moment in Jaws. But as soon as he tried to repeat the effect, the original stopped working!

In Wait Until Dark there are only thee major shock/terror moments in the entire film – but they are brilliantly effective. Thus a thriller concentrates on building tension, giving the audience few moments of release.

The problem with developing thriller characters

For all this, it’s crucial that we have reasons to care about the protagonist – which means she must be rounded and credible. However, in thriller so much emphasis goes on raising the stakes and developing the fear factor, that there is considerably less screen time available for developing character. Other films can use complex subplots to enhance characters, showing different traits and moods. But spend too much time away from the suspense and a thriller begins to droop.

This probably presents you with your biggest challenge – balancing the needs of the plot with finding time to evolve characters who are credible and three-dimensional. There’s no easy answer, you have to examine every single moment to see what you can squeeze out of it.

Thriller is a deceptively challenging genre. It takes energy, focus and enormous attention to detail. But it’s also a very popular genre, and if you get it right the rewards can be enormous – not only in financial terms but also artistic satisfaction.

Charles Harris is an award-winning writer-director and a director of Euroscript. His new book Complete Screenwriting Course is being launched this week, published by John Murray Learning. He’s also going to be at London Screenwriters’ Festival, Friday 24 to Sunday 26 October 2014, in the Euroscript Room. Find out more about this, his blog on screenwriting and his book at www.charles-harris.co.uk