When Opportunity Knocks… and You Don’t Answer

In 2015 I started a writers’ group in Cardiff and online, which burgeoned into a fantastic community of successful writers. One of the early events in Cardiff was a talk by BBC Wales Drama Development script editor (now producer) Jenna Robbins about screenwriting opportunities. Jenna generously explained the development process, how she goes about finding new writing talent, exciting projects and matching them up.

Within a long and detailed talk, Jenna explained that sometimes, she’d get so far with a project and it might not happen, because the writer thought they weren’t right for the project and would step away. Sometimes that idea would be taken to another writer – but sometimes it would be dead in the water.

After the talk there was a Q&A – I was quick to remind my keen writer friends this was not a pitching session. A produced theatre writer asked Jenna to explain, when a writer steps away from a project, isn’t that showing a weakness in their ability and wouldn’t they be better demonstrating their adaptability? Jenna explained at length that her writers would rather focus on projects within their wheelhouse, that they were passionate about. 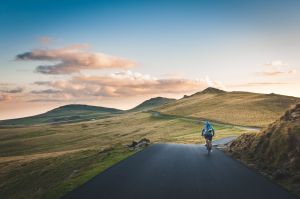 A second hand shot up and again the question was around this point – this writer had comedy and drama specs and was working on a novel – what were the kind of circumstances where a writer might think a certain project was ‘not for them’? The questions continued in this vein, until I had to step in and explain to Jenna. These writers, some of whom were as yet uncommissioned after several years of spec-writing, couldn’t understand how a writer would ever turn a project down.

I’ve been lucky in my varied career that several opportunities have come along, usually at once, and I’ve been able to work across TV, film and radio as well as moving between drama, comedy and factual. It’s accepted that new-starters in the industry must have a broad skill-set, e.g. from common sense to a bit of social media wizardry and script reading talent. But at some point, it’s also acknowledged that you’re supposed to pick a lane.

For writers, there are so many routes we can take, depending on what we ultimately want to do, that the path can be forked, winding – even a complex spaghetti junction, depending on the decisions we make.

If you want to get into features you should make shorts, if you want development execs to see your work you should write plays. To move into full-length TV, consider web-based short series, whereas sitcom writers are advised to start with sketches.

However, if you haven’t yet chosen your ultimate destination, the route can be even more circuitous. It takes a lot of work to make a grounding in more than one medium – let alone for those who fancy themselves across both drama and comedy.

Considering my varied history, it’s a bit rich for me to encourage anyone to narrow down their focus, make a single choice and move doggedly toward it without deviation – except I’m more an example of what not to do. So here’s the lesson in the single focus.

Decide what you really want and stick to it.

Once you’ve mastered that, you can move on to your second, third and fourth goals, but line up your ducks one at a time and shoot them down. If you dream of being the next Greta Gerwig or Jordan Peele, then make films. Whether you’re obsessed with EastEnders or The Wire, make TV drama your only prize – for now. Each and every one of these routes is so difficult to master, you need to eat, sleep and breath it to make it so.

And before we move on, let me refer to a cinematic masterpiece in romantic comedy; undoubtedly the best film ever based on a self-help book, the truly wonderful He’s Just Not That Into You.

There will always be examples, of the person whose Edinburgh show took off and they had series commissions in comedy and drama and features and… there is always an exception to prove the rule. But perhaps it’s safer to assume you are the rule. Throw yourself into one script until it’s the absolute best it can be, then develop that into a stepping stone to reach your career goal. Once you have your massive smash hit; be it on Broadway or Channel 5, then you can move immediately on to your next gigantic dream. Yes, you can do it all; but one at a time.

So what do you do when opportunity comes knocking… but it’s the wrong opportunity?

Imagine this: you want to get into sitcom writing. You have three or four specs behind you, because you’ve entered the BBC Writersroom comedy window for the last few years. Each one is a little better than the last and at least once you’ve made it to the final shortlist. You submit sketches to Newsjack every season, but maybe topical isn’t your thing, however it’s good for building those comedy muscles, so you continue to do it. Maybe a radio comedy producer is considering a sitcom idea you pitched to them, after meeting at an industry event. For a comedy writer you are on track. The journey is slow and up-hill, but the destination is clear.

Maybe you have an agent or you met someone at the BBC Writersroom who said you can submit a spec to the Doctors Shadow Scheme. They will happily read a half-hour comedy script and you know that, if you were lucky enough to get on the scheme, you could write a funny Doctors episode. There’s no extra effort to sending a script that’s already been written, so you do that. Because while this unlikely opportunity would put you on the scenic route to your ultimate goal, you would still be headed in the right direction.

However you’re not getting answers on anything, things have ground to a halt and you’re wondering about changing track. There’s a BBC Writersroom drama window coming up and the Red Planet prize and you know someone at the Royal Court who will read a drama for you. With your skills in structure and character, maybe things would move along more quickly if you had a train on each track. And you already have that idea you wanted to write, the thing about the woman with the flawed character in that impossible situation. That could definitely be a drama. You can submit that script to both competitions and that feels like doubling your odds. You’re excited, because you haven’t started on a new project in a few months. Suddenly you see an opportunity that gives new hope where before there was little.

You enjoy the plotting and brainstorming, the character biogs and working out how to combine layered A, B and C stories. The idea takes up your waking hours and your dreaming hours too and you throw yourself into it, as you always do. In the meantime another comedy window opens and closes, but you can’t concentrate on that because this idea is burning through your mind and you hate being torn away from it. So you write it, develop it, get advice from an editor, re-write and, to make it the best you possibly can, sit on it for a week and re-write it again, pouring in your soul. You stick it into the drama window and it only gets long-longlisted.

Now, writing a script is never a waste of your time. You’ve developed your skills, honed your style, taken another step on your journey. But what direction are you headed in now? You’re on two tracks, but you’re at a standstill on both of them, instead of moving slowly on one of them.

This writing business is hard. Whichever path you take, it’s always hard. But taking double paths doesn’t make it half as hard, it makes it twice as hard! Of course it does. You know that.

You can definitely make it. You can make it in numerous fields, becoming a professional writer. A writer without a day job. A paid writer, then a fully-paid writer. There is nothing stopping you; as long as you maintain momentum, keep your eyes on the prize and write.

Jay Harley is a Screenwriting Coach at Script Angel. You can find out more about Jay and the rest of the Script Angel coaching team here.