A Guide to Writers’ Rooms and Showrunners

British television drama shows are increasingly moving towards the model of writers’ rooms and showrunners, long prevalent in the US, where a lead writer takes on many of the responsibilities of an executive producer, including selecting other writers and running a writers’ room.

In response to this evolution of writer working practices, the Writers’ Guild of Great Britain (WGGB) recently published a best practice guide to Showrunning in the UK. 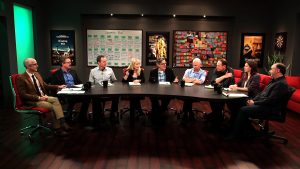 Here we’ve summarised the new guidelines and the panel discussion around them.

What is a showrunner?

A showrunner combines the role of lead writer and executive producer. They are the ultimate authority on the show’s scripts, storylines and characters. They may also have final approval of other aspects of the show, such as casting, design, locations etc. They are deeply involved in post-production, and the final cut.

They are part of the management structure, involved in the employment and dismissal of writers, crew and other creatives, including directors. Notably, they are able to rewrite episodes initially given to other writers.

What is a non-writing executive producer?

It’s common in Britain, but not the US, to entrust a non-writer with many of the responsibilities listed above (this is particularly common on continuing drama series). Usually given the title of executive producer, this person will make decisions about the direction of the show and characters and give notes on all scripts but will not write episodes themselves. A non-writing executive producer is not a showrunner.

What is a non-producing lead writer?

In the UK, the duties and responsibilities of a lead writer vary widely. A lead writer should have the final say in all matters of script, storylines and character arcs.

In practice, the rights and responsibilities of the lead writer are often taken by non-writing executives, resulting in some lead writers being confined to writing their own scripts and rewriting others’ scripts as and when instructed to. Some do not even routinely read and give notes on other writers’ scripts unless asked to by their executives.

A lead writer should be willing and able to read all drafts of all storylines and scripts, to give notes and to rewrite wherever necessary. A lead writer should be regarded as the head of the script department and their final decisions should never be overturned by anyone (including directors) without prior consultation.

What is a writers’ room?

A writers’ room should be led by the showrunner. Producers, script editors and assistants may be invited to be part of the process, and will often make valuable contributions, but a true showrunner should make the final decisions. As both writer and producer, they bring a cohesion to the process, which eradicates division between script and production.

A brainstorming session where non-writing producers will ultimately make the creative decisions is a story conference. In the UK, it’s commonly used in producer-led continuing drama. It’s not part of the showrunner model.

The panel described the showrunner-led writers’ room as being a group of writers working together to ‘break’ a show and its stories, where those contributing writers will then write an episode. The scope and length of time varies enormously, and can be anything from 9-5, five days a week, working out every story beat of every episode together, through to just a few days working out very broad brush strokes of series story arcs which the showrunner then goes away and breaks down in more detail.

It might also mean much earlier stage, broader questions about the tone of the show and detailed character development work, like building a house from the ground-up with fellow crafts-people.

What should a showrunner put in place to make sure writers in your room have a good time?

As a writer, I’d want my showrunner to have given us something to work with, although in reality sometimes we’re creating the whole show from almost a blank page but without any creator credit.

Sometimes the challenge is that your showrunner has come in with too much detail and is inflexible; they’re set in their ways, defensive about everything and you can’t question or change anything.

The ideal is where the showrunner has done the groundwork; this is what I’m thinking, this is my idea for the solution to the mystery, here are the core characters who I think will tell this story really well, here are the questions I’ve got and here’s what we can play with.

For the showrunner to bring a piece of work can also be hugely helpful, not necessarily a full pilot script but something that shows the tone and pace of the show. It’s so hard to discuss tone and pace and much easier to show people what you intend by writing a section. Even if you don’t end up using it in an episode it helps everyone face in the same direction.

Coming in with a vision and being prepared to throw it all up in the air when the writers you’ve hired to help you have even better ideas and being really open to those ideas.

All of the panel placed huge value on the amount of time allowed for this work, and noted that time spent at this stage of the process is well invested. If you make mistakes here and spend a week wresting with an episode story that doesn’t work, it’s cost you the week’s wages of a small number of writers, which is nothing compared to the cost of solving story problems when you’re in production with 100-strong crew.

It’s a false economy to rush the development process.

What is your advice to writers, once they’ve got in the room how do they stay there and get asked back? What do you require from your writers?

Having great ideas in the room and being really collaborative. Flexibility.

Writers who are prepared to really investigate an idea, rather than say ‘we’ll sort that problem out later.’ You need to fix everything at this stage of the creative process, before the house is built, so you don’t discover later that the sofa doesn’t fit through the door because the door’s too small.

You need a bunch of co-conspirators who are generous with their ideas. Some people listen really intently and are able to investigate what everyone’s saying, and others come in with loads of ideas which you need to filter.

You need huge amounts of energy.

And a lack of ego, to be able to throw ideas out and be able to face in the direction that the showrunner thinks the show should go in.

How do you know if you’re speaking too much or too little in a room?

You’ve got to be good at reading the room. In that sense writers’ rooms do pose a problem if they become the only model, because some writers aren’t great people-people but are great writers.

For neuro-diverse writers especially, being able to ‘read the room’ may be challenging but they can bring a perspective that the writers’ room would hugely benefit from.

Having a diverse writers’ room is essential because you’re getting opinions and experiences that aren’t yours and that’s gold-dust. Multiplicity of perspectives can only be a good thing.

If you have a new idea for a series, would you now create a writers’ room to help you develop it or would you still do that work alone and make it a solo-authored show?

For some of the panel, they’d take everything to a small writers’ room. “Writing a tv show is like writing a novel really, really quickly. I never thought anyone could help me with writing before, but I’ve discovered that in a writers’ room fellow crafts-people can help me. For the process to work other writers have to get inside your head and you have to allow them in.”

“I still love being alone and in my head but anything over four episodes I’d want a writers’ room.”

“Even when I’m writing all the episodes, I’d never describe it as all me. I have a fellow exec who is like my one-person writers’ room. Us collaborating is vital for me to be able to work everything out. I’ve always had someone who helps me – whether I’m writing an episode of someone else’s show and had a great script editor, or I’m developing a new project with my co-exec – I always benefit from a great creative mind to help me.”

How do you keep the energy going in the room?

“Try to keep it inspiring”, “good coffee” and “cake” were the top suggestions! And early finishes because of the inevitable afternoon slump – “nothing good ever happens after 3pm”, after that it’s diminishing returns.

“Games are good.” Ask silly questions, like ‘what’s your favourite twist of all time?’, ‘what would never happen in the show?’ Try to get the room spitballing mad ideas to keep the energy up. Ultimately it should feel like playtime.

Read the full WGGB Best Practice Guide to Showrunning in the UK.

Find out how to join the Writers’ Guild of Great Britain.

Get professional development help to create your spec television series and pilot script with our Screenwriter Coaching service. 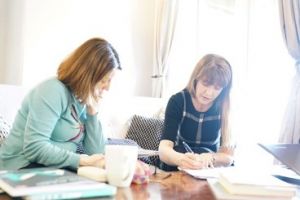