Screenwriting is a collaborative job. The script development process might feel like a solo effort while you’re happily ensconced in your attic, lovingly crafting your spec script with little more than a ‘meow’ from your cat for days.

But it takes an army of people to turn your script into a work on screen that audiences will engage with, which means that making screenwriting your career is all about being able to collaborate with others throughout a professional script development process.

So how do you hold tight to your vision of the script without becoming so intransient that no-one will hire you?

Being a professional screenwriter is not for the faint-hearted because everyone, and I mean everyone, will have an opinion on your work. From family and friends who read the earliest draft, through to the location manager who thinks you can easily switch your park for a diner and it won’t matter (it will), they’ll all have something to say about your script.

And most people reading your script will have a particular angle on it. The development assistant or script reader looking to filter out all the bad stuff but also worried about missing ‘the next big thing’. The agent that knows a producer that’s looking for something a bit like this if you could just change it from a drama to a horror movie. The producer who thinks they can raise the finance for it, but just not the amount it’s going to cost to make and who wants you to cut half the locations and characters. The studio exec that is looking for a vehicle for his 40-something male star so if you could just rewrite your lead character twenty years older and change their gender, please. 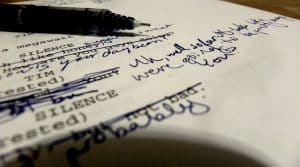 Even when you get through development, into production and eventually share your story with the world, everyone will have an opinion on the finished work. If they love it, it’ll be because of the great performances, but you can bet your bottom dollar that if there’s anything they don’t like about it, they’ll blame the writer.

Learning not to take it all personally or drown in the notes, ideas and suggestions that come your way takes practice and a tough skin. But for the most part, no one is out to get you. It might not seem like it at times but everyone who gives you notes during the script development process is doing so because they think those notes will help make the script better, improve its chances of getting greenlit, or solve a production problem so that the project can be delivered on time and on budget.

One of the first places most writers experience getting feedback on their work is from an independent script editor, consultant or screenwriting coach. A script development professional you hire to help you develop your project is well worth listening to because their focus is to help you make the script the best version of itself that it can be. There’s no boss they’re trying to impress, no gap in a development slate they’re trying to squeeze your project into, it really is all about helping you improve your script.

Finding a good script consultant or screenwriting coach is important, so take your time. You’re going to be investing your hard-earned money in your professional development so choose wisely; research them, check out their professional script development experience in the film and tv industry read testimonials from other writers and ask about them among your screenwriting community.

Getting poorly considered notes from an ego-driven, inexperienced script consultant can be a bruising experience. You want honest but constructive feedback so look for someone whose approach to working with writers is a good fit for you and who is there to support and develop both you and the project

Being able to take on board their notes is a great first step. But even with your no-agenda screenwriting coach you might not agree with everything they have to say about your script. So how do you know which notes to address? I’m a great believer in instinct. Do the notes feel right? Do they chime with what you’re trying to do? Often, it’s a daunting prospect because of the sheer amount of work the rewrite to address the notes will take, but usually you know it needs to be done.

If it feels like the right thing to do, even if your heart initially sinks at the thought of the hours it will take, then make those changes.

If your script is optioned or you get commissioned, then you’ll get notes from a lot more people and this is where it gets trickier. Your script consultant thinks their notes are worth listening to but ultimately you’re the client so if you don’t want to do the notes, that’s entirely your prerogative. Once someone is paying you to write this script, then suddenly just ignoring notes you don’t like isn’t an option.

The professional script development process in feature films and television can be very different but the net result to you, the writer, is pretty much the same – a lot of people giving you notes on your beloved script.

In films there might be a script or story editor, a development executive and producer from the first production company to come on board, then notes from other producers coming on board and committing money. The general rule is; if they’re putting money in, they’ll expect a say on the script. In series television you could have a script editor, series editor, story editor, producer, series producer and executive producer, all giving notes on every draft of your episode from first pitch to shooting script, and even into post production, rewrites and re-shoots!

And then of course there’s the director. Unless you’re making a very low budget film and funding it yourself or you are already an established writer-director, the chances are that someone else is going to actually turn your script into a film or tv show. Screenwriter Robin Mukherjee, who wrote the screenplay for award-winning film ‘Lore’ says you have to embrace the collaboration process. For him, the worst thing is if a director just shoots your script – what you want is for everyone to be adding something to the creative process.

Does that mean you are expected to address every note you’re given as a commissioned writer? I don’t think that’s in anyone’s best interest but do be open and listen to everyone because you never know where the best suggestion is going to come from. Then go with your gut. Don’t just roll over and do notes you strongly disagree with. Don’t ignore them either but fight your case, persuade others of the strength of your vision.

If you’re challenging every note, then either the people you’re working with don’t share your vision for the project or you’re still developing your ability to collaborate, because there’s only the tiniest chance that you’re right about everything and everyone else is wrong about everything. The truth of what is best for the project will probably lie somewhere in the middle.

Film and tv might be a multi-billion dollar global industry but it’s also highly inter-connected, so being able to collaborate with other people is a major part of any screenwriter’s long-term career; even experienced screenwriter Karl Gajdusek talks about taking notes from Tom Cruise on his screenplay for ‘Oblivion’. Whatever level you’re at as a professional screenwriter, you’re going to get notes on every draft. Learning to deal with that process, to argue your case when you disagree but also to take the best of what others can bring to your script, is the best approach to navigating the script development process and ultimately the way to a successful screenwriting career.