What Is Your Character’s Interpersonal Style? by Phil Lowe

Regular readers of my ScriptAngel guest blog (of course you are: Creating Conflict Using Personality Theory, Character Motivation) will know I divide my time between the world of business psychology and writing fiction, and use the former in the service of the latter. This time, a model to help you think about how your characters interact: the FIRO-B.

“FIRO-B” stands for “Fundamental Interpersonal Relations Orientation – Behaviour”. It’s a measure of personal style which looks at an individual’s preferences for three different categories of interacting with others:

Have a coffee and read the grid below, and I’ll see you on the other side: 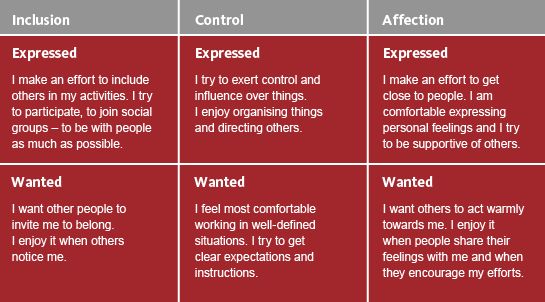 Were you to complete the psychometric questionnaire that goes with this model, you would be given a score in each of those boxes, which would represent the extent to which those statements apply to you. For our purposes, just think about scoring high, medium or low – this would reflect the range of people or situations for which the statement is true. For a fictional character, all scores have potential: a very high or very low score may border on the compulsive, useful for both comedy and drama; an “it depends” medium score can make the viewer curious: we see a character in their first scene surrounded by people; then we discover they’re a loner – so what’s driving the behaviour….?

As a practical example, while everyone’s raving about the BBC’s Wolf Hall, think about Thomas Cromwell:

Inclusion: Let’s start with his ‘wanted’ score: a ‘medium’. There are quite a few people in whose company he wants to be, in several situations; but he only wants to be with people who are useful to him, and generally those in Henry VIII’s circle. In terms of ‘expressed’ his score is lower – he’s highly selective about whom he invites into his own circle; generally his family, and individuals from whom he needs information. It’s a pattern we call “cautious association”.

Control: high Expressed Control clearly evident; do you ever hear him say “Actually, your idea is better, let’s do that”? And very low Wanted Control: notice how often Anne Boleyn in particular tries to pull rank on him and he just stands and refuses to give her the deference she craves. The scene that caps it all is when Henry loses his temper at Cromwell and accuses him – him, Cromwell (sorry, Mantell fans, couldn’t resist) – of using Henry to further his advancement. Cromwell crosses his arms, stands unmoved. You never see anyone telling him what to do. It’s a pattern known as “Mission Impossible” – a profile shared by high flying executives and tragic heroes. Cromwell is on the verge of discovering it isn’t possible to control everything.

Affection: Low on Expressed Affection, Cromwell is clearly highly selective about whom he opens up to (his immediate family) – mainly because of a lack of trust, which would be the prerequisite for a higher score. I would lay money that his ‘wanted’ score is much higher, a pattern known as “Cautious Lover” – in other words, “I’ll show you mine if you show me yours” (er, that’s “Affection”, obvs). There are many scenes in which a female character, such as Mary Boleyn, initiates the possibility of a warmer, more intimate relationship, and he – he, Cromwell (it’s alright, I’ll get fed up in a minute) – becomes warmer in response. That’s the key to the ‘wanted’ dynamic: someone else needs to initiate it, but the character’s responses to that initiation gives the clue.As you use the FIRO terminology to get a fix on your character, here are two aspects to think about:

The balance between Expressed and Wanted scores. The simplest characterisation in terms of Inclusion or Affection is where the Expressed and Wanted scores match. For example, If I score high on both Expressed and Wanted Inclusion, that suggests I want most people to include me in what they’re doing, and I regularly include most people in my activities. Everything matches; people will see me as sociable, so will tend to reciprocate; I get what I want. But what if I had low Expressed but high Wanted Inclusion? I really really want people to include me, but I’m uncomfortable initiating social contact. What will I do? Well, I might hang around by the water cooler at work, making it easier for people to notice me. For a recent example of Low Expressed and High Wanted Affection, try Spike Jonze’s Her, in which our protagonist achieves intimacy with his computer operating system (and not a single “expansion slot” gag in 120 minutes).Control, by the way, works slightly differently in terms of Expressed versus Wanted: the simplest profiles are high on one and low on the other (if I want to tell others what to do, it’s easier if don’t also want them to tell me what to do, and vice versa). Low on both can be interesting (“Don’t tell me what to do, and I won’t tell you what to do”) and high on both even more so (someone who wants to both be in control and be controlled; unless they’re a sergeant major in the army this will cause internal conflict, and in real life can lead to alcoholism or drug dependency, where the artificial substance is what the character abdicates control to).

How the three dimensions interplay. This is a huge topic, so for now think about which dimension most defines your character: do others experience them most as sociable, as controlling, or as affectionate? Notice also how scoring high on all of them would make a character a real “ball of fire” (as played by Jim Carrey), while low on all makes them highly self contained, a rock (the ‘outsider’ of the Western genre).Remember, as with all the models I share, a little learning can be a dangerous thing in real life; please don’t go psychoanalysing your friends. But your fictional characters can be as messed up as you like – and their imperfections will affect their relations with others.

The FIRO-B is published in the UK by www.opp.com, and in the US by www.cpp.com