Writing diverse characters who aren’t like you. Screenwriting coach Jay Harley has advice on using your skill to write diversely and create brilliant characters.

Moving on from my previous article, where I discuss writing authentically from your own perspective, I now want to talk about writing characters who are not like you.

Obviously, as writers, we imagine others and portray them with all our skill and specialism – how else would we write murderers and politicians and journalists, who are so unlike us? At it’s core, what I’m talking about is how to write diversely. But I want to make sure you’re doing so in the most characterful way.

The term ‘character biography’ is almost an oxymoron, yet we use it every day, to try and distil the essence of our characters. Now, I want to draw the distinction between characteristics and biographical detail and see if you can’t write a much better script doing just that.

Many character bios include only the biographical information; job, marital status, where they grew up, copious reams of backstory information. They probably tell us about the ways each character ticks a box, in terms of sexuality and so on. They may also include a line about what makes the character funny or dramatic. They often don’t tell us enough about the unique personality traits, including flaws, that will drive this story forward.

On top of that, many times in writers’ rooms and script meets we’ve struggled to define a character while developing their story and a writer or producer will suggest “What if they’re a lesbian?” It’s slightly hard to believe, I know, but when we’re stuck, we tend to draw on tropes and types, of which, I’m guessing, lesbian is one.

However, these are not dramatic characteristics. To suggest they are is to suggest that there’s a gay way to react to a given set of circumstances. I am sure that no writers really believe this to be the case.
To exemplify, here is my favourite sentence I’ve ever written for Script Angel: It’s lesbians vs. nuns. 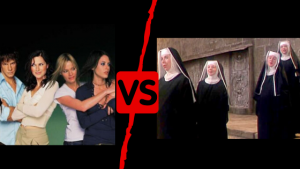 The L Word is a great example of a spectrum of characters who react in characterful ways. Yes, their sexuality is a defining feature keeping this friend group together. Yet if you locate all of the lesbians in this example, they’re not more than a slither of a wedge on the sexuality spectrum – they are a mostly wealthy, upper-middle class LA friend group. They’re all thin.

There are sure to be further, different personalities among lesbians in Guatemala, Estonia and Rotherham. And we’re still talking about a fifteen-year-old/returning show to exemplify the point – because lesbians on-screen are so often tokenistic, shallow and don’t have a character beyond that one biographical point. So really, it would be better to think of lesbians as people and ascribe human characteristics. Imagine that!

In The Sound of Music, one could describe the protagonist, Maria, as a nun. What does that mean? That she’s pious, dedicated and faithful? Could we imagine a nun, who is none of those things? Lucky for me, I don’t have to work out Maria’s character through textual analysis, I know she’s “A flibbertijibbet, a will-o’-the-wisp, a clown!” I also know she waltzes on her way to Mass and whistles on the stairs! This person seems a far cry from any of the nuns I know.

Who describes Maria in this way? A superfluity of other nuns. Are they all pious, dedicated and faithful? Actually, they’re not all anything. One is cross about Maria’s nonsense, one seems to love her, another wants to help her – Maria even makes Sister Margaretta laugh. Each of their distinct characters are conveyed, even though we know little of their biographies outside of their work habits.

This may seem blindingly obvious, but if a writer struggles to imagine six distinct lesbians, nuns or animated chickens, how can they imagine one, which isn’t just a stereotype?

Think about some of the characters you know and love best. What do you love about them? It’s probably not their job, their religious background, their sexuality or age. More likely it’s that they kick ass, or hate everyone in an endearing way.

I have a strong feeling that what I’m saying will be obvious to most writers. Yet I’m still seeing people writing highly stereotypical characters who react in a small handful of ways. If you’re a writer who doesn’t consider themselves to be diverse, just write a truly brilliant, character-driven, non-stereotypical script. It really is that easy.

So; the real dilemma. If you’re not lucky enough to be trans like me, how do you write an authentic trans character who can’t be re-cast? [N.B. Whether or not trans actors are cast as trans characters or at all is a-whole-nother can of awful, which The Industry needs to address]. Firstly, ask yourself why you want to write a trans character? Because trans is on-trend? (I feel so blessed.) Because it’s interesting to you? Because that’s what the story is about? I’m not here to tell you what you should write, or who you should write about, but check your own motivations the same way you check those of your characters.

It’s the same if I decide to write a person of colour or someone with a physical disability.

• Why do I want to tell a story from this perspective?
• Is it my story to tell, or would someone with a closer perspective have a stronger relationship to the subject?
• Could I properly collaborate* with someone to improve my representation? (*which doesn’t mean expecting someone to work for free, or for a one-off consultation)
• Is this work cultural appropriation?

Remember this is not about someone else telling you what or who you should or should not write about. You can write about whatever you like – that is part of your privilege. But, you need to manage yourself in this respect. Good intentions might equate to challenging on-screen diversity, but they might also lead to a white-saviour narrative where you’re trying to highlight the struggles of other people. I think, if you’re honest with yourself, you know the difference.

If you’re not sure, hit the search engines, e.g. a quick search of disability tropes finds a lot of really helpful resources (see very accessible guides by Alyssa Andrews). There are well-established and respected creators having work cancelled and funding pulled because they’ve overstepped what should be a very obvious line, so you need to be careful.

But if you write a truly brilliant script, it will be noticed and you will enter those exciting diversity discussions. Then you can use your position of privilege to argue for gorgeous, representative casting. If you write a truly brilliant script, whether you’ve imagined characters from other backgrounds won’t matter. Really, that’s the point. It’s your turn to do thorough research and be extra brilliant.