Voiceover, To-camera, and Flashback as narrative power in drama by Lucy Hackney

Last time we looked at how a voiceover, far from weakening drama, can add colour, focus and tone. Now it’s the turn of a similar device, sometimes called “breaking the fourth wall” or talking “to-camera”, where one or more character turns to look down the lens of the camera to address the audience directly.

We tend to think of this playful rule-breaking technique as a modern phenomenon although it’s been part of the stage-writer’s tool-kit for hundreds of years; Think of the magnificently two faced Iago in Shakespeare’s Othello. Iago, such a loyal friend to Othello in all his actions and words. But his inner darkness seeps out as he turns to the audience to tell us “I hate the Moor”. Suddenly we are both watching the events of the play and inside this villain’s head.

But despite this ancient heritage there can still be a startling unexpectedness when a writer breaks the fourth wall in an original way. 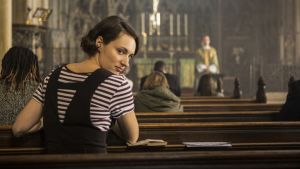 The protagonist in charge

Consider Fleabag. This clever writing not only makes us feel like the central young woman’s confidante, but bonds us to her like a pair of drunken mates on a night out. Perhaps unsurprisingly, given its originality and distinctiveness, the series stems from a one woman stage show. Every element of the story is about what the central character of the clever, funny, self-destructive, depressed, libidinous young woman thinks.

It’s a commentary on the second by second minutiae of her daily life – the judgements she makes of people she sees on the tube, the bored resentment of her sisters and step mother, the relative hotness of all men in her orbit and how she can’t be quite bothered to commit to any of them except notably the one she absolutely can’t have – the Priest. Who else would be interested in this stuff but a close mate? She’s made us that person and by virtue of that confidence, yes, we are interested.

What is so well judged is the lack of explicit articulation. The performance is given space in the script to speak for itself. Very often Phoebe Waller-Bridge simply looks into camera. And her asides to camera are often really minimal, they just give us an understanding of her “performance” not just as an actor but a character.

If you watch her first Therapy scene with Fiona Shaw, the asides are short enough to play the rest of the speech in real time; “I’m good at this”/ “tough crowd”/ But we know exactly what she means… we’re impressed with her cocky wise-cracking in this solemn space. And then as the scene goes on the way that she can’t keep up this perky banter with us/herself as the therapist gets closer to the bone with questions like “do you have any friends?”. Suddenly our friend can’t crack a joke to us, she’s just controlling her own expression. It gives the audience a chance to look at our friend for who she is when she’s not driving her own narrative.

This deeply confident assured and multi-layered use of breaking and not being able to break the fourth wall is sophisticated writing indeed. It is the definitive heart of this very memorable and influential piece. Without it, Fleabag is nothing.

Adding to style and tone

Another really fine example of an all-embracing use of to-camera is the film about the financial crash of 2008; The Big Short by Adam McKay and Charles Randolph. The challenge of the film was pretty huge; to explain the insane intricacies of the banking and housing bubble in the mid 2000s but also to make it gripping and even amusing.

The voiceover and to-camera narration of what’s happening and what it means is split between almost all the characters in the film. The pace is rapid and intercutting of scenes/ strands and character point-of-views is as fast and entertaining as watching the split-second passing of a basketball game.

There are some brilliantly dynamic explanations of very abstract financial ideas some of which come in the form of cameo to-cameras from the likes of Margot Robbie and Anthony Bourdain playing themselves, randomly wheeled into this fictionalised world; “This is Margot Robbie in a bubble bath…” in which she pithily explains housing bonds. It shouldn’t work but the very absurdity keeps the kaleidoscope of colour turning.

Given how shattering and potentially depressing the film’s truths are it’s huge credit to the writers that the atmosphere doesn’t drive you out of the cinema with despair with revelations like; “If we’re right, people lose homes. People lose jobs. People lose retirement savings, people lose pensions. You know what I hate about f*cking banking? It reduces people to numbers — ever 1% unemployment goes up, 40,000 people die, did you know that?”. But then there’s the wit “Truth is like poetry, and people f*cking hate poetry”; and that keeps you going.

In this film the decision to have shared knowledge and storytelling with all the characters involved is integral; they are not all speaking as individuals but as if they have worked it all out between them first. It’s as though they have stepped into the future and are now able to give this commentary with the benefit of group hindsight. It feels like a kind of witty, knowing history lesson or a warning, piped back into the time of the events themselves.

The strong take-away from these examples is the degree of knowledge with which the writer wishes to imbue the narrator – is it total, like Rue in Euphoria? Or does that character believe themselves to have knowledge and control but we the audience are allowed to see that they do not like Fleabag?

A writer needs to be sure what they are saying and who is saying it and why. To-camera and voiceover narrators are superpowers for dramatists. But like all superpowers they need to be used wisely.

In the final part of this blog we’ll turn back time with Flashback to see how the past is all relative.