Script Angel founder Hayley McKenzie sat down with Imogen to chat about her writing and how she got to this breakthrough point in her career. 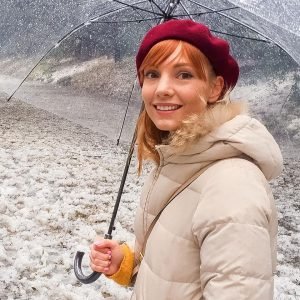 Huge congratulations on signing with an agent and getting your first feature film screenplay commissions.  Can you tell us a bit about how these breakthroughs came about?

Thank you very much! One of the happiest surprises was learning where work really comes from. When I started out, I thought you had to go around ‘elevator pitching’ yourself to high-flying executives. Shooting business cards out of a holster. Holding desperate eye contact while giving a magnitude 7.0 handshake. Thankfully, there’s another way. For me, it’s been the real friends made along the way who have recommended me for projects. That and the portfolio of scripts to follow up.

When and how did you realise you wanted to be a writer/screenwriter?

I wish I had a cool answer for this. I was doing my English dissertation on film adaptations of King Lear –  mostly so I could write about Akira Kurosawa and Jean-Luc Godard in a way that sounded fancy and literary. Unfortunately this meant watching a dozen other tedious King Lear adaptations, in a wooden booth, in the middle of the library, on an ancient cathode ray telly.

I don’t remember which of these set me off, but one was just pure bathos. I lost it. Giggling away, I guess I realised that even I – author of the world’s most mortifying teenage poetry – could have written a better screenplay. It was clearly some kind of dissertation mania. But I found myself imagining my dream King Lear adaptation for a long time after that.

What was the first script you finished and did you send it anywhere?

I co-wrote a coming-of-age comedy with Dof Dickinson, which was optioned twice. I was maybe twenty-two at the time. Our producer flew us to LA to follow up on some offers, but I can only chuckle about it now, imagining how wide-eyed I must have looked. There’s no way they could have taken me seriously. I wasn’t even taking myself seriously.

At that stage, were you writing regularly?

Not really. I was working as a Don Draper and initially found it difficult to write all day, only to go home and try to write all night. It took me a few years to build up the stamina of a full-time writer. I was more Peggy Olsen.

Even though all the glamour is gone and it’s mostly writing spam emails and Youtube prerolls, people work damn hard in advertising. I’m grateful for the training. Learning to write through exhaustion, through hangovers, through meddlesome clients, through confidence crises and even through a total dearth of ideas. It’s always possible.

How many projects are you actively working on at any one time?

All the best ideas announce themselves when I’m supposed to be working on something else. So in the end I just went with it. Juggling two or three big projects at once is stressful, but it helps me stay at my peak creativity. If one gets stuck, I can switch lanes instead of losing speed.

You’ve also had success in theatre, with the sell-out comedy cabaret Major Bombshell. What made you decide to write for the stage and do you think it helps your screenwriting?

A golden nugget of advice from you, Hayley! I didn’t realise I was in a unique position as a comedy writer, until you explained how easy it is to get writing performed, even while you wait on other projects and producers and things. All you really need is a pub, some jokes and a performer – and their mum’s mates to come and see it all.

As it happened, my insanely talented ‘triple threat’ cousin Sammy Courtright was going to be visiting from LA during the Fringe season, so we figured it was meant to be. It was a hoot. I knew I had to have her sing, which led to the discovery that I’m not half-bad with song lyrics.

I was pretty haphazard with the producing and promoting bits, but I learned a lot about writing and directing comedy. The chance to hear whether your jokes land or bomb – and rewrite the clangers – is brutal but brilliant. I would recommend theatre to any writer.

How long does it take you to get from idea to polished spec script and has that changed over the years?

At some point I realised I was a character-driven writer who was totally crap at plotting. Taking this as a challenge, I got more serious about outlining my ideas, down to each individual scene and its dramatic question or purpose. If I’m honest, I hate doing it. It’s joyless. I’ve got lists and a spreadsheet and everything. But it’s helped me go from about six months per polished draft to more like two or three. It’s also helped me hone my sense of whether an idea has legs in the first place.

Also – and I hesitate to add this – I sort of stopped caring about ‘the rules.’ You know: No unfilmables, no dialogue right after a slug line, hit this beat on this page number, and so on. I’m not saying I went rogue, guns blazing. But I started to realise all my favourite produced screenplays had these beautifully poetic action lines, or haiku-like formatting, or jokes hidden as character thoughts in a way that said far more than a parenthetical. Weird, cool stuff. I do realise the hypocrisy of now giving some advice… but I feel like you have to do the right thing by the story, not the Hollywood gurus.

Do you set yourself deadlines for completing each script?

Yes. (Not sure I have anything interesting to say about them, other than that they are a cruel necessity!)

When you finished writing your first spec script, did you have an idea of where you wanted to be with your writing in five years’ time?

I wanted to ‘make it’ but wasn’t really sure what that meant. I suppose I imagined it as living in my own house and being able to order food at a restaurant without looking at the prices. But by the time I was writing seriously, every day had some new article announcing the death of the entertainment industry. Millenials murdering this and that. So I’ve always felt like I couldn’t admit to it. A bit naughty to be trying it at all.

If I can offer any advice, I do think that clearly visualising my future and coming up with some concrete steps to achieving it probably would have made things happen more quickly. But I never had the bravado to nail a dream collage to the wall.

Did you have a plan for how to get from hobbyist screenwriter to professional?

I tried to focus on what I could control, because there’s an awful lot about this industry that you just can’t. (What’s already being made. Who’s funding what. What they say they’re looking for. What they’re actually looking for.) I felt that if I focused on myself, my craft, my support network and my calling card scripts, a pinch of luck would do the rest.

What made you decide to start working with a screenwriting coach at Script Angel and how did that change things for you?

When I decided to leave my advertising job and commit to writing full time, I was surprised how quickly I became overwhelmed, directionless and insecure. What the screenwriter coaching at Script Angel gave me was far more than feedback, advice and deadlines. It was a genuinely thoughtful person who took an active interest in nurturing my ideas and my work. Someone to help me see my strengths when I couldn’t. Someone to nudge me when I could do better. Someone to lift me out of the pit of despair – and tactfully point out that it was only ever knee-deep.

What was your experience of trying to get the industry to read your scripts in the early days?

My problem was that I wasn’t asking in the first place. I’d attend these talks where producers would regale horror stories about getting stalked by some mad writer, and become terrified of coming across like that. Unfortunately I then tried to be so delicate, people often didn’t realise I was angling for a script read.

Eventually I took the advice to enter anonymous competitions and host table reads with actor friends. It was really painful for me. I’d wake up in the middle of the night in a cold sweat, convinced everyone was about to find out I was a fraud and that I still don’t know how to use a semicolon. But as the feedback trickled in, it was generally encouraging and nothing like the slap in the face I had imagined.

Did producing your own web series help to make connections in the film and tv industry?

Depends on what you mean by connections. Sadly we didn’t have the finances to seriously promote it or screen it in more than a few festivals. But what it did bring together was a lovely gang of creative friends – almost all of whom are still in the industry working on some really incredible stuff. Another brilliant aspect was learning how a script relates to its final content. I can now understand how my writing will affect blocking or art direction or editing.

You don’t have to make your own stuff to get experience, though. I’ve made lifelong friends helping with zombie makeup, finding a believable dead dog prop, decorating an action set with my lifeless corpse and guest directing a lesbian rom-com.

What do you want to be doing in five years’ time? Do you have a plan of how to get there? Does your agent help in this?

It sounds a bit trite, but I just want to be able to keep working and having fun. Of course I want the films I work on to get made, but I think realising its possible to make a living just doing rewrites has really taken the pressure off the whole ‘overnight success’ thing. Five years ago I think I would have wanted that. But I’m so glad that never happened, because I was an idiot. Now I’m looking forward to growing my career in a careful sort of way. More tortoise, less hare. My agent is wonderful because he checks in on me, reads all my stuff and helps send the best of it out to more people than I could possibly hope to meet.

What’s the one piece of advice you’d give to someone starting out?

I think there is a lot of pressure to emerge fully formed. A piece of well-meaning advice I’ve often heard goes something like, ‘Thanks to the Internet, you can do it all! You can write, shoot, edit and sell a movie on your iPhone!’ And it’s true. But if you don’t want to do it all and you just want to write, then just write. Don’t feel bad about it. Don’t compromise on your passion. You don’t have to be Donald Glover. He is already really fucking amazing at being Donald Glover. Just stay in that chair and work on the stuff that tickles you.