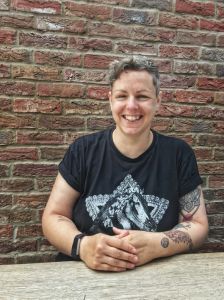 “I’ve known Hayley for years, bumping into each other on the script development circuit, so I’m excited to be joining the Script Angel team. The variety of writers and projects is an absolute dream and I look forward to developing a mix of drama and comedy, for film and television. The screenwriter coaching programme is a uniquely brilliant opportunity to work with writers over a long period of time on their script and career development. I can’t wait to get started.”

Jay Harley has a keen interest in developing emerging writing talent, having worked extensively as a script reader, including for the BBC’s Continuing Drama Shadow Schemes, It’s My Shout (short film scheme), BBC Writers’ Academy and the Wales Drama Award.

“Jay is a talented script editor with a wonderful breadth of script development experience across television, radio and film,” said Script Angel CEO Hayley McKenzie. “Their passion for developing emerging screenwriting talent, and their ability to develop trusting relationships with the writers they work with will be a great benefit to our clients.

Script Angel is expected to announce further appointments in the coming months as it cements its position as a leading player in the UK’s creative industries talent development sector.