This week it’s the turn of screenwriter Jeff Povey;

LOST – the entire box set. Obviously it serves as a handy guide to survival on an island. But it was also a series that gripped me completely. I couldn’t wait for season two but by the time it came around I was already into something else. Lost set a new dynamic – for me anyway – and it was the idea that television could rival film. The first episode had cinema written all over it. Admittedly it was ultimately a heightened soap opera packed with character arcs that could stretch across innumerable seasons (and Soap is a good word by the way) but I also think Lost was the perfect blend of action, intrigue, romance, sci-fi/weirdness and melodrama. It basically ticked just about every box there is in TV. I semi regret never watching all of Lost which is why I’ll take the box set on an island with me.

GODLESS – a one off western series, that was apparently meant to be a movie at one time, and is one of the best examples of how to continually rack up tension. Inch by inch we are heading towards an inexorable nerve wracking climax. It then totally delivers the best, most satisfying final episode you could dream of. There is no hook at the end, no desperate lunge to drag viewers back. It is what is and it stayed true to that. It had a beginning and it had an end and for me that creates a platform for great storytelling.

Godless is from a storyteller at the top of their game who refused to stray from their vision. I always think that if you know where the finishing line is it makes the journey tight and spare and riveting, it draws you into that world and stays there. There’s no room for flights of fancy or muddling diversions, or a lame last minute grasp at a new idea. I’ve been in Writers Rooms and if it is a brand new series literally no one knows how it will end, and even if they do, it will change. I guess the moral of this is nail the ending as hard as you nail the beginning. Even before you write your first scene.

THE X-FILES – the perfect precinct for a riveting story of the week series. Yes, there is a nod to serial elements and the fact that there’s a dark conspiracy at the heart of it, but for me the true joy of The X-Files was that every episode ended. I got my kicks week in, week out, following a brand new story and it was bloody great. In The X-Files we had two people, Mulder and Scully, and that was pretty much it. How bold and brave to bet all of your budget on story of the week winning the day. Nowadays broadcasters are petrified audiences will never come back if there isn’t a hook. How sad is that? Literally nothing that is terrestrial, or web based asks you to drop in when you feel like it.

I give up on so much content now, because I usually get to episode three, then sneak a look at how many episodes or seasons are left – and I just know I won’t hang around that long. You’re asking too much of me and my precious time. The deep satisfaction of watching an episode that actually ends should never be underestimated – so at least on the odd occasion let me choose when I want to be thrilled.

And for the sharks

It’s actually hard to hate a series but I’m going to go for the reboot of Lost In Space as the series I’d chuck into the sea. A series that I dragged myself through for no reason other than I was ill at the time and wanted something fun and frothy. The original Lost in Space was a series I remember watching when I was a kid. It was funny, characterful, had a brilliant villain and it was joyous fun. The remake had no froth. No fun. Just a sense of deadly earnestness throughout. But the sort of earnestness that comes with a preachy life lesson that no one ever asked for. There is one lesson though, and that is some TV is of its time. It also belongs to some viewers’ times and should be remembered fondly in a rose tinted way. 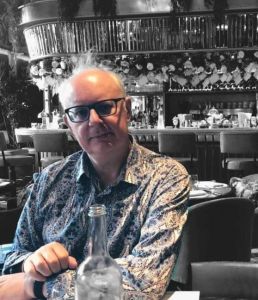 Jeff Povey has written extensively on UK television dramas including ‘Silent Witness’ (BBC), ‘Kingdom’ (ITV), ‘The Musketeers’ (BBC) ‘Midsomer Murders’ (ITV), ‘Hooten and the Lady’ (Sky), ‘Casualty’ (BBC), ‘Holby City’ (BBC), ‘EastEnders’ (BBC) and ‘The Dumping Ground’ (BBC). He wrote and directed a short film, ‘Blowing It’ which was shortlisted for the Orange FilmFour Prize for Short Film and has written four novels; ‘The Serial Klllers Club’ which is currently being adapted into a film and a YA trilogy –‘Shift, Delete and Escape’.