This week it’s the turn of the brilliant Debbie Moon;

The key to surviving on a desert island is a balanced diet – so I’m grabbing three very different TV series!

BATTLESTAR GALACTICA (2004). What I love about sci-fi is its capacity to deliver insights into politics, morality and the human condition alongside the robots, aliens and ray guns. The flawed and desperate survivors of the human race are on the run from artificial intelligences who can look just like them. There’s a safe place out there called Earth: but how much is humanity prepared to sacrifice in order to survive – and are they even the good guys?

Everyone loves a con man, but heist and con shows are notoriously hard to sustain. US show LEVERAGE succeeds by following five mismatched criminals with different skills – hacker, tough guy, cat burglar, grifter, and an insurance investigator turned criminal mastermind – pulling cons to help people shafted by the system. Covering everything from fake psychics to political corruption to corporate malpractice, the show sucks us into the fantasy of taking down the faceless bad guys who run the world. And the characters are terrific.

In case I spend a while on this island, I’d better have something that covers every genre from history to the far-future, from comedy to powerful emotional drama… DOCTOR WHO. It’s the perfect premise: a magic box that can go anywhere and anywhen, with a hero who’ll always do what’s right and inspire others to do the same. And after fifty years, there’ll be a story for my every mood, however long I’m stranded! 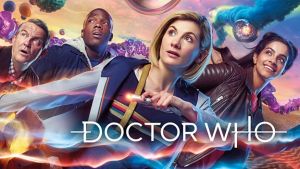 And what am I feeding the sharks?

You’re going to hate me, but it has to be BREAKING BAD. It’s well written and well directed and influential, but… it leaves me cold. Maybe the sharks will enjoy it more…

Debbie Moon is the BAFTA-winning TV writer of ‘Wolfblood’, ‘Sparticle Mystery’ and ‘Hinterland’ among others and can be found on Twitter here @DebbieBMoon and on her brilliant blog debbiemoon.wordpress.com.