‘Story’ Versus ‘Save the Cat’ – Screenwriting Book Review by Phil Lowe

I can’t claim to have read every book on screenwriting (I don’t suffer from procrastination quite that badly) but I’ve done my fair share, and these two hardy perennials are the books I return to most often when I’m stuck or needing a compass to navigate through a rewrite. 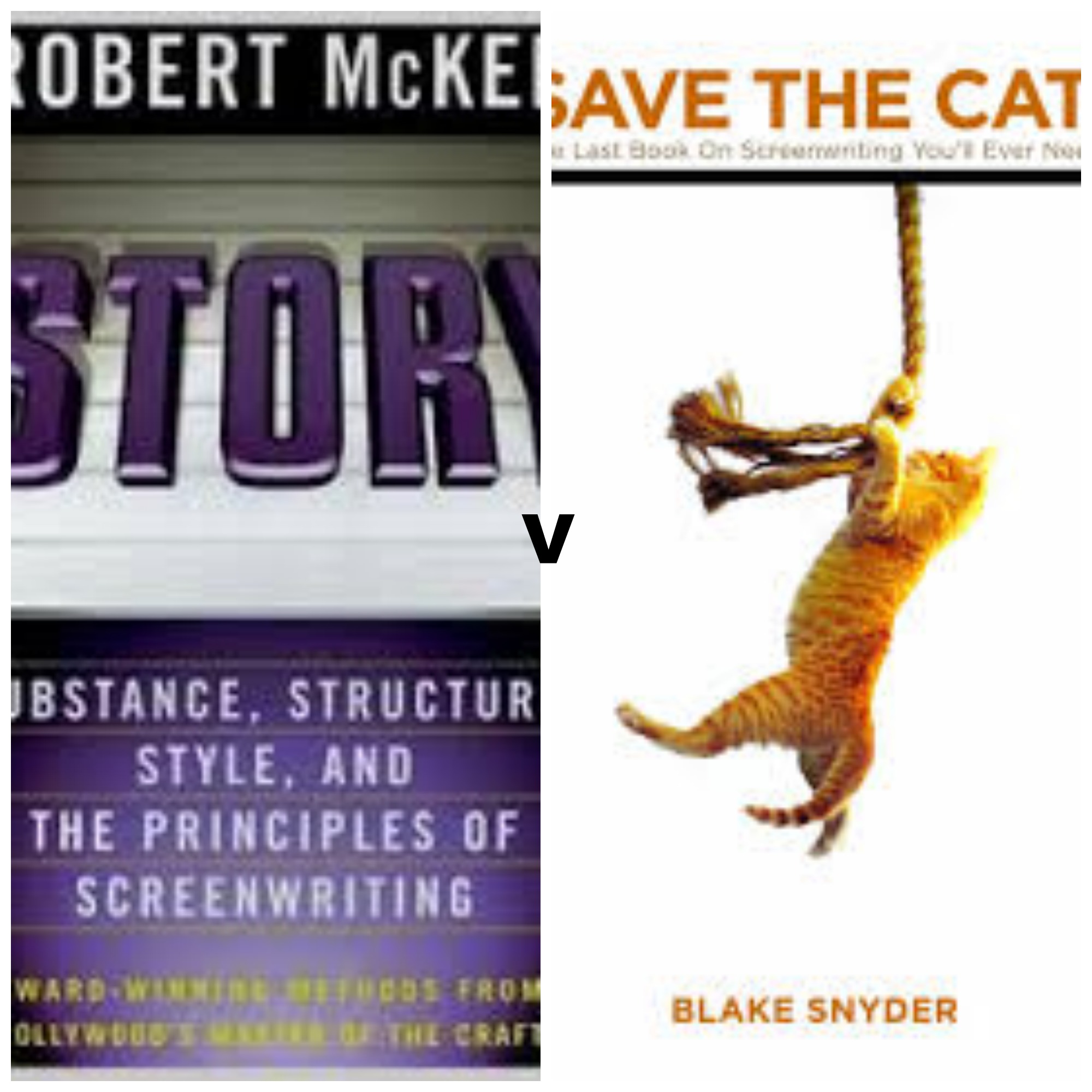 Like good scripts, they are a mix of the original and the familiar. Both, in their way, are shining examples of “what oft was thought, but ne’er so well expressed.” “But which is better?” you can’t help asking. And I have to answer: it depends. They are both written by opinionated and provocative individuals, fiery pulpit preachers of The One True Way. Both are dealing, one way or another, with the Three Act Structure; each finds a very different way into it.

Story is the book which made me want to write fiction again after ten years in the world of business writing. A colleague lent it to me after a conversation about the design of team exercises. I read it and, like Keats on first looking into Chapman’s Homer, the scales fell from my eyes. I thought: “finally, after all these years, I get it – I see why I’ve never managed to plot effectively.”

It is a dense and thorough tome. Don’t enter without a distress flare and your eight favourite records. Lose yourself in it and you will emerge days later, dusty, bloody and gasping for air, your head ringing with phrases like “The Negation of the Negation” and “Extra-personal conflict”. Then, as the dust settles, you are left with simple, elegant ways of thinking about character and story construction – like the idea that story is driven by the gap between what a character expects to happen and what actually does happen. It’s a principle that applies not only to action, but dialogue as well (watch any episode of Eastenders to see how they make the dialogue crackle through each character giving the answer the other doesn’t expect).

Story is so thorough, though, it can put you off. Every time I look at those wheel diagrams of how to use minor characters to show the protagonist’s qualities, I find myself getting one of my headaches and I despair of ever being able to write anything vaguely well constructed. But if you go in with a “cherry picking” mindset, you can’t lose, so rich is it in nuggets.

So Story sounds like the complete package – surely the only book you’d need? Well…

At the beginning of a school holiday, my head teacher wife asked, in that casual way she does, “Are you busy over the next couple of weeks?” Five minutes later, I had “nomineered” to write an original school play for a cast of forty from scratch and have it ready to go at the beginning of the following term. This was no time for “The Negation of the Negation” – I reached instinctively for Save The Cat.

If McKee is the great academic of screenwriting theory, then Snyder is its ultimate pragmatist. Unashamedly populist where McKee is bombastic, his book eschews “Archplot” and “The spine of unconscious desire” for “The Pope In the Pool” and “Bad Guys Close In”. His adherence to box office takings as the ultimate measure of a film’s success will rile many (where McKee idolises Casablanca and Chinatown, here we kneel before Legally Blonde and Miss Congeniality). But this is not a man who wants to be seen as deep and intellectual – we are talking, after all, of the writer of Stop! Or My Mom Will Shoot. Put your prejudices aside, and you will find his legendary “beat sheet” a lifesaver if you want to generate coherent plot quickly. He enables you to step back and see the arc of your story with stunning simplicity, where McKee can make your head spin. His material on creating titles and premises by looking for the irony in your idea is a great thought starter, and like McKee he reminds us that story is as much about character as plot – which is where the title phrase comes in (I won’t spoil it for you).

If you go back to McKee after Snyder, you will find not only more subtlety but a more inclusive approach. Snyder sits Memento atop his demonology (It doesn’t follow his beat sheet and it didn’t make money), where McKee would happily include it in his “Antiplot” category. For Snyder, it’s not worth writing if it doesn’t fit; for McKee, everything fits somewhere.

If you can’t face buying both, which should you buy? Tough question: you can’t pick up Story and use it straight out of the box in the same way as Save The Cat! – but on the flipside, Story has more richness. If I had to come off the fence (while still keeping one buttock on it), I’d say go for Story if you’re rewriting and want to give your work a thorough stress test; but if you’re staring at a blank page and want to get the juices flowing, Save The Cat will probably unstick you the fastest.

Before you regard either as a panacea, though, consider: ultimately, both authors remind us why screenwriting is so ballsaching: both, in their own way, acknowledge that while there is a formula we must follow, we must somehow follow it without being formulaic. Sadly, you will not find the answer to the latter quest in any screenwriting book.

Phil Lowe is a scriptwriter and novelist. He originally trained and worked as an actor and has a professional background in business psychology. www.phil-lowe.com