How to Edit Your Own Work

How to edit your own work – giving yourself a hard time and becoming your own toughest editor. By Lucy Hackney

Having original, instinctive ideas expressed in a particular exciting new voice is a great gift to a writer and something the industry will always seek. But it’s hard to sell that raw ability without the skill to see where your own work is lacking. A sophisticated writer can observe and analyse their own creations. It’s a particular trick involving stepping out of and away from the artistic part of one’s mind and switching into another cooler, more perceptive mode. It’s a Right side Left side of the brain thing.

Just to get you off on the right line of thinking I’ve come up with some questions. Some are to ask yourself about your idea if you’re still wrestling a premise into being, and some for when you’ve finished a draft. In either state as a writer it’s so hard to see the wood for the trees when you’re living and dreaming your idea/script all the time. These questions, some outlandish and potentially absurd in the first imagining could just be the springboard for your own radical rethinks. 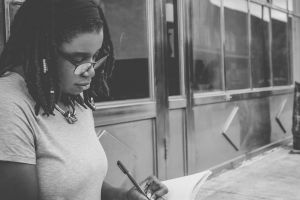 1. What if you swap your characters gender? No matter how Woke you are you’re probably bringing some unconscious assumptions to the table. Does that make things more interesting? Not just the central character but those lovers/best friends/parents/kids? I recently heard actor Maxine Peak talking about playing Hamlet as a woman and heard the director saying it was a hugely refreshing experience to hear those too, too often heard lines spoken by a woman. And look at Ripley in Alien. And what if Little Red Riding Hood in your script were a boy? What then?

2. Demote your hero, Promote your deputy. You know how it’s been nagging at you at the back of your mind that your central hero/heroine is actually a bit dull? Written a bit blank because they’re the goodie? But you’ve been having such a laugh with that best friend character. They’re really jumping off the page. They’ve got all the good lines and that original backstory that hooks into that key plot point … I don’t think I need to go on.

3. Try a different world? The story and characters are fresh but it’s feeling like well-trodden ground?. Consider a full-scale move. It was set in the offices of a City firm? Now set it in a Dance Studio. Or a Glamping site? Or a Star Ship. Yes, you’ll have to do research (or you may know this other world which would be handy) but the very act of getting down to learning about something may be just the chemical reaction you need to set your idea truly on fire (in a good way).

4. Passionate or Worthy? Are you sure you’re keeping the right side? It’s a brilliant spark for a writer to have an issue that they care intensely about – it may be why you write in the first place. But that gift can become a curse. You are going to have to work harder to stand back and assess just how interesting the actual story is aside from the issue. My personal advice and preference is for a political/humanitarian issue to always be wrapped in the dramatic cloak of another story. Rich complex characters with three dimensional lives that involve more than just that one aspect of behavior will help prevent your piece feeling On The Nose.

1. Are your characters and story mutually interdependent? If you switched different main characters into your story and events unfolded in the same way then…that’s a problem. Your characters, the way they behave as people, ought to influence how things play out and probably create the main events of the plot by their behaviour.

2.Are your characters saying what they mean too often? Saying what you mean is a welcome trait in, say, a politician, but far less interesting in a dramatic character. I don’t just mean when people lie about their guilt, but when people wear masks and play roles as we all do; at work, to children, to parents. And those roles and masks and ways of using different vocabulary and language become more layered and so more interesting in times of crisis (and drama). So, rather than your character saying she feels she’s about to burst into tears, might it not be more interesting for her to say “I’m absolutely fine”?

3. Chop off its head. Lose the first third of your story. You worry it won’t make sense because the audience needs to have it explained? The characters need setting up? The Status Quo needs establishing? Really? You may be right but try it; start 20 pages in and see how it reads.

4. Lose the Post Match Analysis. This is obviously linked with the above point in that just as everyone hates a plodding start, everybody also hates an ending that’s strung out for too long. But this “come out sooner” trick should also be applied to individual scenes within drafts. Are people going on about things for too long? Make sure you’re not cueing up events, playing them out and then discussing it. That’s dull writing.

5. Do you really need to tie it all up that neatly? This is a rather different point about endings. Sometimes the audience really needs a sense of closure; after a turbulent harrowing drama for instance. Traditionally a tragedy would end with a stirring speech from a figure in authority, with a sense of learning and if you’re lucky, hope. Is it what you want? Does it suit the tone of your piece? Look at the very ending of Happy Valley as our heroine watches her grandson, run happily over the moors. She is smiling, but then in the last few seconds her gaze seems to be harder and more fearful…what will the child possibly become with the brute of a father he has? It’s not articulated, we never know what questions are in her mind but that dark shadow is just left lying over the comforting sunshine of the final scene.

Similarly, the traditional comic or feel-good ending will reunite lovers and family and pair up potential romantic couples, tying everything off with pleasing bows. Nothing wrong with that at all. It’s adorable. But what if you stuck an ex-lover watching in the wings? Or showed doubt? Look at the end of The Graduate. And of course you could just leave with the van teetering half way off a cliff? Sometimes unsure is more fun too.

I don’t suggest all or indeed any of these ideas will suddenly solve your script issues; but running your idea or script through the interrogation of these questions may just flip your mind from Writer/creator into Head of Development for a while and that’s not a bad angle to see things from.