A glittering red-carpet event by writers, for writers, with the most diverse and inclusive nominee list of any awards shortlist announced so far this year (industry: take note, this is how you do it), last night’s WGGB Awards ceremony was as funny, irreverent and joyous as you’d expect from the creative storytellers whose words, vision and imagination our industry stands on the shoulders of.

The Writers’ Guild of Great Britain Awards are a hugely important celebration of the UK’s writing talent across film, television, theatre, radio, games and novels. The Awards allow professional writers to honour their peers and shine a much-deserved spotlight on UK writers, who are admired across the globe. As an organisation passionate about developing the most exciting new, diverse screenwriting talent, it was an honour for Script Angel to sponsor this year’s WGGB Awards. 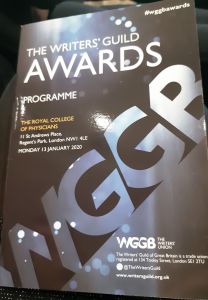 The evening was hosted with wit and verve by Katy Brand, with inspiring speeches by WGGB President Sandi Toksvig and WGGB Chair Lisa Holdsworth, along with a moving tribute to the late, great Terrance Dicks by WGGB Deputy Chair William Gallagher.

Congratulations to all the winners and nominees of the 2020 Writers’ Guild of Great Britain Awards.