This was the fifth TV Drama Writers’ Festival but the first one to be hosted in London. The first four festivals were held at the Leeds College of Music and were spread over two days – this time round, the venue was Central St Martins in Granary Square behind King’s Cross and it was a one-day affair. 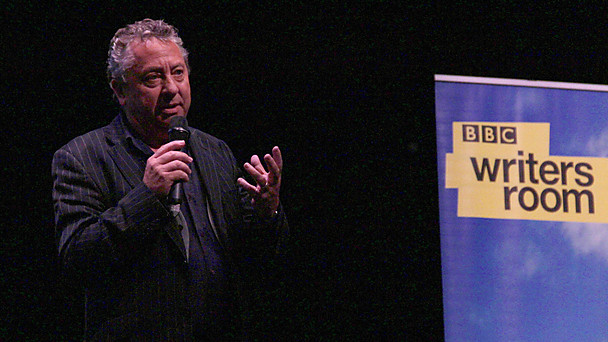 So was this another example of BBC cuts? The 2014 schedule comprised a total of 22 sessions – compared with 30 at the 2013 Festival. This year a writer could attend a maximum of 8 sessions – compared with 10 last year. In purely quantitative terms, the Festival was about 25% smaller but the BBC also reduced the ticket price by an average of 40% making what has always been an excellent value for money event, even better value. (Indeed, a few days before the Festival, the BBC Writersroom website confirmed that the event had sold out.)

Despite this leaner Festival, there were no cut backs in the quality of the speakers, not surprising, given that the Festival agenda and schedule is driven by a team of writers – refreshed every year – making it an event organised by writers for writers.

As much as I enjoyed the annual trip to Leeds, I prefer this streamlined one-day Festival and found the new venue much more spacious and practical.

I attended 7 sessions, missing only the final “Unstoryfiable” talk by Adam Curtis. I chose sessions based on my main interests – specifically new media and obtaining practical advice on selling scripts.

The sessions I attended were:

Last year at the 2013 MacTaggart Lecture at the Edinburgh International Television Festival, actor and producer Kevin Spacey spoke about TV enjoying its “third Golden Age” and declared that the “King of television is the creatives“.

For his own keynote speech, Tony Jordan the 2014 Chair of the TV Drama Writers’ Festival, followed up on Spacey’s pronouncement and asked : “If Content is King, Where’s Our Crown?”

Jordan’s point is that at a time when the demand for scripted drama is greater than ever resulting in drama actually defining channels – both on traditional TV and the new online platforms – why is the business side leading the way and not writers?

Tony Jordan decried the industry’s obsession with brands and wanting instant hits. He referenced the famous William Goldman quote “Nobody knows anything” – as well as Henry Ford’s (probably apocryphal) “If I had asked people what they wanted, they would have said faster horses.”

Jordan was unimpressed with Netflix’s claim that they “ran the numbers” and knew their subscribers would watch House of Cards – citing the counter example of Chris Chibnall writing hit drama Broadchurch as a spec script because he wanted to tell that story and not because of audience data.

Whereas Spacey in the MacTaggart Lecture offered examples and pushed the case for art and commerce collaborating together to make great work – Jordan was more bolshie, arguing that it was time for writers to pick a side – creative or commercial – or as he put it Freddie Mercury or Bananarama.

Tony Jordan urged writers not to chase commissions blindly – not to cynically search for that the gap in the market or the “next big thing”. His rallying cry to writers was “Be creative” and seize the crown by doing good work.

2. So you want to write a feature?

A session on writing feature films might seem out of place at a TV Drama Writers’ Festival but this was specifically about writing low budget features for the latest three-year Microwave scheme – a partnership between Film London, National Lottery, Creative Skillset, BFI and BBC Films. The BBC Films contribution means the Microwave produced features will have their TV premiere on the BBC.

The session was presented by Olivier Kaempfer who was the producer of Borrowed Time, a Microwave funded film and is now a senior executive at Microwave itself – giving him a unique insight into both sides of the scheme. Kaempfer also brought along guest Jules Bishop, the writer and director of Borrowed Time.

In its earlier funding rounds, Microwave produced a total of 8 films – all of which received a theatrical release – the best known probably being Shifty (2009) and ill Manors (2012)

Over the next three years, the new round of Microwave plans to select up to 36 film-making teams for training and mentoring, with the ultimate aim of producing six features with a budget of £150,000 each. Microwave will provide £100,000 with the individual producers of each film having to raise the remaining £50,000. Also for the first time, there is development money (up to £10,000) for the shortlisted film-making teams plus an additional £25,000 for each completed film to help with distribution and marketing.

The film-making team must consist of a writer, producer and a director – with a minimum of two people – so writer-directors are acceptable but one-person taking on all three roles is not. Also a full script is required and the writer and director cannot have had a feature theatrically distributed before. Applications have to be made via a UK registered limited company based in London. Full details are on the Microwave site.

The deadline for the 2014 round is 30th July – so unless you have a film-making team with a completed script ready to go – there is probably not enough time now. However, the scheme is running again in 2015 and 2016 – so getting teams and scripts ready for the next round is a more realistic goal.

Getting the right mix of writer, director and producer is crucial as the film-making team may have to work together for three years or more. Jules Bishop’s Borrowed Time for example was submitted to the 2009 round, shot in 2011 and distributed in 2013. To assist with the formation of film-making teams, Microwave have set up a Facebook group called Film London Talent Connect to help writers, producers and directors to network.

Olivier Kaempfer described the perfect Microwave film as one where if there was more money available, the film would still be the same but the crew and cast would be better paid.

The challenge for writers is to write with the constraints of the budget in mind. The example Kaempfer gave was of a scene set at night in a moving car. Kaempfer suggested that writer should ask themselves a series of questions: Does the scene have to be in a moving car? Can it be in a parked car? Does it have to be in a car at all? Does it have to be at night? This is a process not unfamiliar to television writers!

Kaempfer said Microwave is looking for scripts that “resonate as a London story” – this does not necessarily mean social realism as they are very keen on “diverse genres”. At the end of the day, the script “just needs to be brilliant”.

Note – for film-makers and production companies based outside London, there is the iFeatures scheme which funds films with budgets of up to £350,000. The deadline for this year has passed but there may be future rounds – the website to bookmark is here.

Although the Writers for Sale session featured two writers and two execs, Bryan Elsley co-creator of Skins dominated the debate with his quietly pragmatic and authoritative take on the industry.

Also on the panel with Elsley was Levi David Addai who wrote My Murder for BBC3 and co-created Youngers for E4 and Sophie Gardiner Channel Four’s Drama Commissioning Editor. The BBC Drama Executive Producer Hilary Salmon chaired the session.

Salmon began by continuing the “Content is King” theme with mention of a “Sellers’s Market” for drama. Bryan Elsley responded that writers never feel like it’s a Seller’s Market. He cited production companies wanting more and more initial work such as treatments for free.

Salmon also asked how writers decide who to send a new script to. Elsley said it was all about personal relationships – about working with people who believe in you – “belief is at the heart of everything”.

Bryan Elsley also stressed the importance of money. He spoke about how some production companies now no longer pay the 100% future use fee on the first day of principal photography – an advance that many writers absolutely rely on. Elsley added that writers are aware of and remember the companies that do not pay the future use fee – and this obviously impacts on how loyalties and relationships are formed.

Elsley said that his own production company pays writers for everything – but he also cautioned writers that when they are paid for something, that is when they lose ownership. He suggested that in some cases, having the freedom to walk away and keeping your project can be to a writer’s advantage.

Sophie Gardiner observed that the industry was not very good at giving writers on soaps other opportunities. It was also mentioned that going in the opposite direction, writers with lots of experience had to start all over again when writing for soaps.

Levi David Addai spoke of his own unhappy experience of working on a soap – he felt it wasn’t his characters, it wasn’t his story and in the end writing continuing drama wasn’t for him.

The subject of the writers’ room on dramas was also raised. Elsley’s opinion was that here in the UK, the writers’ room is still unfinished business, a half-way house that pays lip-service to the US model. Elsley believes that writers are not in the room just to write but also to produce. He made the point that US shows have no traditional UK producer role – with the line producer taking on the technical and administrative duties and the writer being the creative showrunner.

However, Elsley also warned that the UK should not slavishly copy the US writers’ room model – he pointed out they were “editorially narrow” with a lack of diversity in participation and editorial control.

The discussion also turned to the touchy subject of script editors. Bryan Elsley thought the role of the script editor had changed over the years. He felt that script editors used to be on the writer’s side but are now on the producer’s side. Elsley blamed the problem on lack of training and development of script editors and particularly their disempowerment – they were reduced to passing on messages from the producers with no editorial power themselves.

Sophie Gardiner criticised the lack of opportunities and entry-level schemes for new or emerging writers. Channel Four received some kudos for their Screenwriting Course and also their Coming Up series (on which Addai got his first television commission).

The session ended on an uplifting note when writer Chris Lunt spoke from the audience to point out that his script Prey for ITV which starred John Simm was his first broadcast credit – demonstrating that it is still possible for a new writer to get commissioned and produced.

In the next article I’ll review Drama on YouTube, The Two Tones with Tony Hall & Tony Jordan, Selling Your Idea and New Markets: Do we still need broadcasters?

Kulvinder Gill is an Indian-born, Scottish-educated, London-based writer specialising in comedy, sci-fi and horror. His Writers’ Guild profile page is here and his Twitter handle is @KulvinderGill.